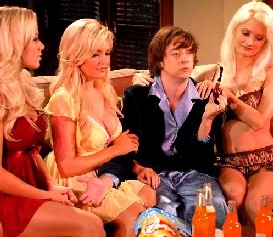 Normally, a CD entitled “A Love Affair” that is to be released just before Valentine’s Day would seem like a great gift for a loved one, right? Well, when the songs are performed by daytime ABC actors, the “love affair” being referred to definitely has to be between us and our favorite stars, wouldn’t you agree? Take a look at this list of songs and, more importantly, who is singing them!

*”They Say It’s Wonderful” by Susan Lucci (All My Children )

*”Because You Loved Me” by Bobbie Eakes (All My Children )

*”Always On My Mind” by David Canary (All My Children )

*”Every Time We Say Goodbye” Anthony Geary (General Hospital) in his recording debut!

*”In My Life” by Rick Hearst (General Hospital)

*Brace yourself for this one my friends: “My Funny Valentine” by Bradford Anderson (General Hospital)

*"Let It Be Me" by Kassie DePaiva (One Life to Live)

*"I'll Be There" by Tika Sumpter (One Life to Live)

*"Never My Love" by Kathy Brier (One Life to Live)

*"From This Moment On" by Kristen Alderson (One Life to Live)

Put your keys down (car or laptop!) because "A Love Affair" isn't available for purchase until January 29. It will be released at mass-market retailers, digital music service providers and even online at ABC store at a heart-stopping low price of $18.98. The cost of hearing Bradford Anderson (a.k.a. Spinelli) sing is worth that alone! Dare we hope that there's a budding romantic beneath all of those geeky hats?

The CD release comes on the heels of the very successful 2007 "A Holiday Affair" collection. Brian Frons, President of Daytime at Disney-ABC Television group, made the announcement yesterday and gives music credit for being an integral part of daytime dramas. He said that the audience responds so well to these compilations because of their passion for the shows as well as the artists.

To me, the surprise of hearing someone's singing voice after watching them act is the draw. I mean, who didn't cave during the holidays when (GH)'s Luke Spencer belted out a Frank Sinatra tune? Some of us have been watching him for thirty years and never heard anything the least bit musical out of that sassy mouth! We all know that Bobbie Eakes has the voice of an angel, but I'm guessing that Sonya Eddy can belt out a devilish version of "Natural Woman." January 29 will tell the tale, my friends. I, for one, will be first in line and will not be giving that particular gift away on February 14 or any other day!

Fans Ring In The New Year With Talk...