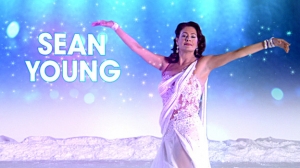 Get ready for a new series!

Sean Young and her partner Denis Petukhov were the first couple to be eliminated on the show. However, fellow soap opera actress Rebecca Budig is still in the running with some very high scores. Soaps.com wishes Rebecca the best of luck!

At last night’s Dancing With The Stars episode, the lineup for ABC’s new show, Skating With The Stars, was announced and included a few soap opera actresses. Set to compete in the ice skating competition will include All My Children’s Rebecca Budig (Greenlee Hayward) and The Young And The Restless’ Sean Young (Meggie McLaine), as well as Motley Crue lead singer Vince Neil, Olympian Jonny Moseley, Disney actor Brandon Mychal Smith and reality star Bethenny Frankel.

If you missed our past interview with the Pine Valley actress please visit Soaps.com Chats with All My Children’s Rebecca Budig. We invite you to join Soaps.com on Twitter @soapoperafan and “like” Soaps.com on Facebook to dish on One Life to Live, all the other soap operas, Glee, Grey’s Anatomy and Vampire Diaries!