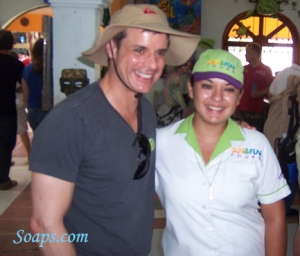 I’m not a blogger and I don’t use a journal, but I was asked to prepare an article about my own thoughts on the first annual Soap Cruise 2007. In keeping with who I am, (I tend to jump around a lot when storytelling!) these are random remarks, thoughts and memories of mine from the trip that I hope you enjoy. Check out the Latest News for even more highlights from the cruise.

I was happy to have the chance to strengthen my friendship with one of the best publicists and sweetest people I know, Cindy, who just happened to be working with me for the past year on the Soap Cruise and on a few other projects regarding other daytime actors! Soap Cruise 2007 may have been a work trip for me but I had a blast and was happily surprised to make new friends – a special hello goes out to Devin, Amy, Tommy, Lizzy and Mike, Lori and Ysaac – we’ve since stayed in touch! I also was able to spend time with and get to know Soaps.com’s very own General Hospital writer, Julie, who I’m pleased to announce, has a sunny attitude and showed her girlishness by giggling with me on several occasions!
After the VIP Breakfast, we were free! Free to roam through Mexico! Why do I sound so excited? This was the day I’d been looking forward to all year. Being a lover of history, I chose to take my excursion with lovely Julie (GH Editor), Devin Owens (Soap Digest and new best buddy), Christian LeBlanc (Michael Baldwin, Y&R and all around great guy who made me almost pee myself on several occasions!) and some of his very sweet friends from New Orleans. We hopped on a tour bus and took off to roam the third most visited archeological site in Mexico, the Mayan Ruins of Tulum, which is located along the eastern coast of the Yucatan Peninsula on the gorgeous Caribbean Sea. We briefly met Jacob Young and Austin Peck there with their lovely wives and over all, the company was exceptional; the well preserved ruins were breathtaking. I literally gasped aloud in awe when we first saw them and not one of the photos we all took did it justice. Our tour guide, Lily (See photo inset with Christian) did a remarkable job of explaining the history behind the ancient city and keeping our interest. Since the ancient city is coastal, we were able to splash around in the warm Caribbean Sea. You’ve never lived until you’ve done this or until you’ve felt that warm, soft Caribbean sand between your toes.

Do I have a highlight? Haven’t you been reading?! (Grinning like a fool here) The whole experience is one I’ll never forget. I also admit I enjoyed sharing delicious pieces of caramelized coconut with Christian, Julie and Devin.

We had some time in between the Acting Out A Soap Scene event and the next and chose to sun ourselves with Don Diamont (Brad Carlton Y&R) and wife Cindy, relax in the pool with Windsor Harmon (Thorne Forrester, B&B) before I grabbed a bite to eat with Devin, Christian (Michael Baldwin) and friends, before we had to sashay ourselves back to our staterooms to change – AGAIN – for the Soap Opera Trivia. The changing of clothes so often drove me mad by this point so I threw on a cocktail dress and wore it during the trivia challenge right through to the evening cocktail party. This night I was torn between wanting to get the heck off the ship and mourning our last night with our newfound friends.

Bit of trivia from our escapades:

After Thursday’s meet and greet, Julie and I strolled… okay we practically ran down to the Spirit Dining Room where we’d take dinner at 8pm with our lovely media pals, Cindy Collins (my old publicist pal and sometime surrogate yet young mom), Devin Owens (new friend who tells great stories and a dirty joke or two, writes for Soap Opera Digest), Amy Tuten (ABC Marketing Consultant and all around great gal pal) and last but not least, Tommy Biggs (Videographer extraordinaire, Sammy Hagar/Vince Neil look- a-like and such a sweetheart of a guy). The food wasn’t the best I’ve tasted, and the service …. Well, it could have been better, but the dinner conversation made up for it. Though there were no daytime ‘stars’ at our table, I wouldn’t have changed who we ate with for the world.

Julie and I could never seem to find our way around the ship (hence the reason we ran to the Spirit Dining Room in heels) so we devised a plan to leave a trail of breadcrumbs (coughlipstickcough) so to speak and by the fourth day on the ship, we actually knew where we were.
Julie Pinson spent a lot of time fighting sea sickness, due to the choppy waters over the Caribbean Sea. I joined her in her misery, having to spend most of my Friday night wasting away in a gorgeous ball gown in my room, feeling queasy until pals, Julie and Devin came to get me around midnight with a lovely cheese-less, meatless pizza. I was feeling better, so we hung out on deck for hours, just chatting and … there was even a little singing involved!

Ronn Moss is just as conservative as Ridge Forrester, which I noticed upon meeting him in June at the Creative Arts Awards. Very dashing! We found it really cool that as we were filming him, he was filming all the fans!

At the VIP Breakfast, Austin Peck told us that he learns his lines when he walks his dog! He also says he refuses to go on message boards after being called "Hairy Monkey Boy" on one. Jacob Young refused to give his secrets out and Ronn Moss added that they memorize with their short term memory and then let it go.

All the actors including Brandon Beemer, agreed they didn't go on message boards due to the horrible actor bashing. They were happy to hear that Soaps.com doesn't allow actor bashing and takes the time to wipe it off the boards if it does sneak by.

Ronn Moss says they do 6-8 shows in one week - and it's a great schedule with four day weeks. Except for L.A. traffic, he can't complain!

Austin Peck says with acting in a primetime show, it takes 8 days to do one show. He jokes that B&B, gets paid more than the rest of them even though their show is a mere 15 minutes!

Julie Pinson collects Barbie dolls and a fan sent her - get this - her own Barbie doll that looks just like her! She was thrilled with it and says, "It overwhelms you. (how wonderful fans can be) So bring it on!" They love their fans and do appreciate all you do for them!

Concerning adlibbing, Jacob Young says he does it al the time. He jokes, "That's why they're striking!"

Tyler Christopher discusses crying on camera. "You think 'dead puppies, dead puppies'! I think it's more interesting not to (cry) but to struggle [so that the words are believable]. Everyone agreed that once you cry, you've got to do it from that point on!

Concerning the Days Vendetta, Julie Pinson made us laugh with when she answered a fan question about when it'd be over. "What vendetta? Oh that's not my storyline. I don't care!"

The soap writers don't all reside in same city, says Jacob Young and Tyler Christopher. They send the storylines in via email!

After breakfast, I met a few of our very own Soaps.com posters! After chatting her up in the message boards for some time, I was happy to get to know "Pelphrey Posse" (who prefers her name to be anonymous). See title photo.

I had to calm down a crying fan over her absolute thrilling meeting Don Diamont. Poor thing wouldn't calm down even when I told her that Don was just a guy! "No! No, he's not," she exclaimed excitedly!

After the Cocktail Party, (see photo at the party with Julie, Lori and Yssac) I was out in the hall when Austin Peck (Brad Snyder, ATWT) came up to me. He couldn't believe how white my blonde hair had turned since we cruised through Caribbean! Holding the ends of my hair he kept yelling at me, "Your hair is so BLONDE! It's SO BLONDE!" I didn't even realize it until that point. Thank goodness it's not as much of a beacon any longer!

Brandon Beemer has a sweet tooth - caught him enjoying the 'chocolate melting pot' desert after dinner.

Windsor Harmon's a pretty good gambler and taught my new sweetheart pals, Lizzy and husband Mike to play Blackjack! He also loves football and spent some time in front of the tube hollering at the game!

The trivia could go on, and on but I've got to save some secrets and hey, you want the complete details? You'll just have to come along with us next year!