The Phantom of the Soap Opera? 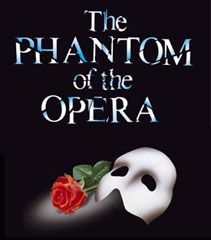 No, it’s not a typo, and, no, I’m not talking about Andrew Lloyd Webber’s Phantom of the Opera. However, although the musical tone of the play carried some similarities to the original, Craig Sodaro’s Phantom of the Soap Opera is being labeled as a comedy – and a mystery – parody all wrapped up in one that is totally unlike the old classic!

Presented by Carson Performing Arts at the Brewery Arts Center, with hopes to raise money to be able to attend the next big regional competition in San Francisco, the director of the theater department, Karen Chandler, boosts about the musical’s uniqueness calling it cheesy, yet fun! Although the audience was able to make a connection to the original Phantom of the Opera throughout the storyline, there were no tear jerking scenes during this show! In fact, the director expresses that though the lyrics were ludicrous, as was intended for the production, the musical was extremely hilarious!

Sit back while we give you a little peek into the much talked about spoof of a drama, which evolved around the studios of two soaps: “As the Heart Burns” and “The Sands of Time.” The actors in “As the Heart Burns” included the beautiful heroine Regina Brooks (Carinne Powell), the has-been diva Daphne Davis (Elisa Sala), and the pink Peto guzzling director Addison Meriweather (Josh Wold). Where’s the hero, you ask? Harlan (Cam Shirley), the eye of Regina’s affection, stars on the rival soap “The Sands of Time!”

As for the Phantom… He was the mysterious figure lying in wait backstage of the studios with one motive in mind – to make Regina his! Once the Phantom finally made his move, fans saw two new characters come on the scene, Detective Digby Wright (Dakota Dutcher) and his faithful understudy, Eve Potter (Lainey Henderson).

While the original drama-filled Phantom of the Opera scenes, such as the chandelier crash and the tension-filled candlelight dinner was replaced with a less dramatic non-shattering of plastic and a couple of shared Big Macs, fans got a kick out of this wacky musical creation!

Soaps.com wants to wish the Carson High Theater much success with this wild and entertaining fundraiser! We hope you were able to raise the money you needed to make it to the next big regional competition in San Francisco! The Phantom of the Soap Opera was a hit with many soap opera and musical fans alike!

Amy Mistretta
Assistant to the Editor-In-Chief
Editor: One Life to Live
Soaps.com

Plans to Ensure the Safety of Two...