Soaps.com goes to the I Wanna Be A SoapStar Finale! 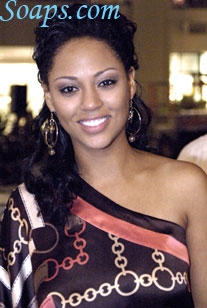 By all accounts, this season of I Wanna Be A Soap Star showcased the highest caliber of talent in the show’s history. While it made for great television, it also made the judges’ job all that much harder. After the taping of the live finale, the judges stuck around to chat with the press, (myself included) and while Cameron Mathison had to jet back to New York and Hogan Sheffer eluded me, I was able to pin down Michael Bruno and Mary Beth Evans (Kayla, Days) to find out how they felt about this season of Soap Star.

Even though it was a tough decision, it wasn’t all on the judges’ shoulders, as the audience had a hand in choosing Ashlee Holland as the winner of a role on Days of our Lives. But even with this new twist, notorious judge and talent manager Michael Bruno felt the outcome was justified. “I think Ashlee is a soap girl. She reminds me of Julie Pinson (Billie, Days) actually, of all people. She plays great tough girls. She needs to work on her vulnerability a little bit more, but I thought she’d win,” he shared.

As for runner up Jimena Hoyos, Bruno believes, “Jimena is more of a complicated actress. I think she’s a film actress.”

But whether they won or not, Bruno thinks all 10 actors from Soap Star have bright acting futures. “I do think they all win from this. It really was the most talented year that we’d had and they will all work. All my casting director friends, they’ve already called in half these kids.” And Michael himself is repping several of them, including Travis (who he has already placed on As the World Turns), Justin and Monica.

According to Mary Beth, even though there were tough decisions to make, the editing of the show made it seem tougher. “People give us grief and we’re like, ‘They were like seven minute scenes.’ I mean a lot happened! You [didn’t] see a lot of things, a lot of arcs and things when they edited it. Anybody can look great when they chop it. We defend our positions (laughs)!”

Michael backed her up on this, stating, “It was very serious for us and those deliberations did take a very long time. We took it very seriously.”

So with the competition being so tight, did they second-guess themselves once they watched the edited version of the show? “I watched it with my daughter and I thought ‘Oh God that person looked really good, why did we get rid of him?’ But you know we can’t back track and it’s the editing. It looked different in person,” Mary Beth explained.

For as tough as it was, Mary Beth didn’t even want to do the show in the beginning, but as she recalled, her good friend Michael Bruno talked her into it. “I didn’t want to do it; he really kind of forced me to do it, he’s my pal. I didn’t want to hurt anybody’s feelings or vote people off; I don’t like that kind of thing. I felt bad in the course of this, but I felt honest about it so it didn’t kill me,” Mary Beth reflected.

Since they did watch the show on SOAPnet and the clips of the contestants mocking them were shown at the finale, I had to ask what they thought of their imitators. Not taking themselves too seriously, both Michael and Mary Beth saw the humor in it. While Mary Beth “didn’t think it was too insulting. I probably do all those mannerisms,” Michael Bruno found it puzzling. “I thought it was funny. I was insulted because I couldn’t see if they did me up there. I thought it was all Hogan and [Mary Beth],” He winked.

Getting back to the topic of season 4’s winner, Michael was pleased that soaps and TV in general will have another African American to write for. He stated, “I don’t think there are enough black people on television. It’s not what represents America.” In regards to Ashlee in particular, Bruno said, “I just love this girl. And I think she’s very American in that sense and I think people can really get behind her, but in the sense of diversity, it’s wonderful. Now they have to figure out where to put her. Is she with James Reynolds (Abe), is she with Celeste? And it forces them maybe to have to write for them.”

Or maybe Ashlee will be paired up with Marlena, as another reporter at the taping shared with me. But whomever her character interacts with, you can count on Soaps.com waiting, watching, and writing about her debut on December 26th.

History of soaps - past meets the...