I Wanna Be A Soap Star Finale! 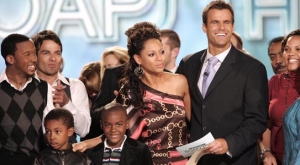 It’s that time again, time to cast your vote for the next America Daytime soap star! This year’s winner of SoapNet’s I Wanna Be A Soap Star will be revealed on October 16, 2007 during a live Season Finale Hosted by Cameron Mathison!

UPDATE: Winner is Darren Zancan. More about this later with our interviews from the live finale!

Starting on October 9, 2007, unlike any other season, the fans were able to start voting for their favorite contestant and will have a say in deciding who should become the next winner of “I Wanna Be A Soap Star,” who will take home a 13-week contract role on Days of Our Lives!

Votes will be received through Wednesday, October 10, 2007 until 11:00 pm Eastern and can be placed online at SoapNet.com or through a 1-800 number that will be revealed during episode 9. Keep in mind… Fan votes will count for 50% equally alongside 50% of the judges’ votes.

On Tuesday October 16, 2007, during SoapNet’s first-ever live season finale at
the Hollywood & Highland Complex, host Cameron Mathison (ABC’s AMC’s Ryan and Dancing with the Stars contestant) will announce the chosen winner, who will join the cast of NBC’s Days of Our Lives! The finale will air live on the east coast at 11:00 pm and is live to tape airing at 11 pm on the west coast. All eight eliminated contestants will be in attendance to witness which finalist will be packing their bags and heading to Salem!

On October 9, 2007 at 8:00 pm ET/PT, the three remaining contestants will tackled their final challenge on episode 9 by putting on their dancing shoes and performing a set of ballroom dances for the judge’s critique. During this final elimination, the judges decided who had the worst moves and who should advance to the live season finale on October 16!

Over the course of the season, maintaining the necessary skills to stay in the game, the final contestants have shined in their performances during the challenges each week as they learned how to act in various bedroom, beach, bar and hospital scenes. However, as in any contest, there will only be one winner who will walk away with the 13-week
role on NBC’s Days of Our Lives during the live season finale!

With executive producers Eric Schotz and Lisa Bourgoujian at the helm, the fourth season of I Wanna Be A Soap Star is a production of LMNO Cable Group for SoapNet.

What else did you miss?

Episode 7: Drunk As A Skunk

As the wanna-bes learned how to play a character who is drunk, guest stars Brandon Beemer (Days Shawn Brady) Martha Madison (Days Belle Black) and Josh Taylor (Days Roman Brady) made a cameo appearance in this memorable scene where the contestants took one step closer to their dream of becoming the new American soap star! At the end of the day, the judges decided who was the best drunk and who should be ‘killed off’ and sent packing!

As a special treat! Soaps.com journalist Lori Wilson will be at the live finale waiting with anticipation to interview this year’s lucky winner – and also other contestants from the show! So fans, if you have any questions you’d like Lori to ask, please post them here, under the comments section, and Lori will do her best to get your answers!

Amy Mistretta
Assistant to the Editor-In-Chief
Editor: One Life to Live