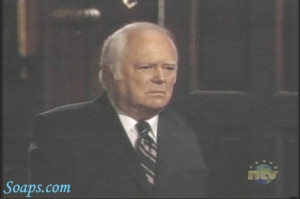 Why is Phyllis in jail? She was put away for extortion.

Judy B. asks: Would you please tell me the name of the new rock band on All My Children?

Soaps.com: Our All My Children Editor, Kristi, has informed us that the band doesn’t have an “official” name. They’re merely referred to as the hip-hop band and practice next to Tad’s house. The member’s include Dre, Ren and Corrina.

Paige R. asks: I am 13 years old and have great grades in school and I was wondering if I could ever get a roll of Jenny (Krystal’s daughter) when she is older?

Soaps.com: Unfortunately, Paige, Soaps.com does not hire actors for the shows. This is done by their casting directors. You may want to have your parents look into this for you by contacting All My Children at:

You may also like to take a look at our article on Becoming A Soap Star . In any case, always follow your dreams! We wish you the best!

Lea N. asks: I didn’t get to watch the soaps for years and missed out on a lot of stuff that happened. Is there someplace where I can go to see or read about some of the back episodes and/or storylines?

Soaps.com: You’ve come to the right place, Lea! Although we offer you Past Archived Recaps of the show back to July 2006, you can also visit our Cast List to read the character’s history on their profile pages, which will be sure to catch you up from the months you’ve missed the show! Have fun going back in time!

Maureen B. asks: Please tell me how I can find out what took place on As The World Turns during the weeks September 10 – 27, I was out of the country and it seems all kinds of exciting things occurred during my absence!!!!!!

Soaps.com: Hi Maureen, we hope you enjoyed your trip! You’re in luck, all past episodes of As The World Turns can be viewed in our As the World Turns Daily Updates Archives section, along with photos! You have quite a bit to catch up on, but being a true fan, I’m sure you’ll see it’ll be well worth it! Enjoy!

Ric F. asks: As a long time fan of Susan Flannery, I am curious as to why she suddenly has departed the soap at a critical juncture. Is the actress ill? On vacation? It just seems strange that she “went missing” at a time that would have pushed her even further into the on-going storyline of Brooke’s rape… she has been MIA going on 3 weeks now… I hope she is coming back soon.

Soaps.com: Although Susan Flannery recently took some time off for feeling a bit ‘under the weather,’ and then took a vacation, shortly thereafter, our sources over at The Bold and the Beautiful have informed us that she’ll back in the studio taping very soon and will be back on the scene on October 19, 2007! Thanks for your concern! The actress really appreciates all of her fans!

Jeanne S. asks: I would like to have a catalog or know where to go to see Hope’s jewelry line, in particular fleur earrings?

Soaps.com: Hope wears some beautiful pieces, doesn’t she! Well, now you too can own them by visiting Hope Faith Miracles! We hope you find what you’re looking for!

Sandra N. asks: Who plays the part of young Shawn Brady in Ireland? He looks so much like Grandpa Shawn Brady. I’m wondering if it’s the actor’s grandson.

Soaps.com: We asked our sources at the show and found out that Tanner Maguire plays the part of young Shawn Brady. He plays it well, we think! Although we too can see the resemblance, no, the little tyke is not related to Frank Parker (Shawn Brady).

Kristine W. asks: What happened to Robin and Patrick? Did they split up and when? I missed that one.

Soaps.com: Unfortunately, Kristine, the couple split a few weeks back after Robin expressed an interest in becoming a mother. Patrick, on the other hand, wasn’t interested in having children.

Frances O. asks: I have watched GL for the longest time, and I was wondering what has happened to the character “Nola”. She was a very perky person and just wanted to know where is she now. Thank you

Soaps.com: Oh we loved Nola! Here you go, Frances, we’re opening the soap vault from the past just for you! Since leaving Guiding Light in 1984, Lisa Brown (Nola) appeared on and off on ATWT as Iva Snyder Benedict from 1985 to 2003 and also on Loving as FBI Agent Carolyn in 1995. She also directed (in 2004), a TV Pilot called “Waterfront”, starring Scott Reeves (ex-Ryan McNeil, Y&R) and many other soap actors. The Pilot wasn’t picked up by a network but it was segment was seen on Soap Center on SOAPnet. Last we’ve heard of her!

One Life to Live
Nartessa H. asks: I miss David a lot. When is he coming back?
Soaps.com: You’re not the only one who misses David, Nartessa! Although Tuc Watkins (David) was supposed to be back in September, his first airdate back has been moved to November 2, 2007.

Laura A. asks: I want to know what channel Passions is on? I have the satellite, my daughter has dish network, and I love watching Passions and I’m upset because you took Passions off the cable system.

Judy C. asks: I’m so upset… I have been watching Passions ever since it started and now that it has gone to Direct TV I can’t see it anymore. Is their any other way I can see it. I have been reading updates on the web. I really miss it thanks.

AnnaMarie V. asks: I Want to know what happen to Nina?

Soaps.com: Boy we miss Nina! Since leaving the Young and the Restless in 2001, Tricia Cast (Nina) has appeared in the 2006 movie “Fay in the Life of Dave.” You can take a peek at a clip from the movie on YouTube! Sit back and enjoy!

Steve W. asks: I would like to know why Phyllis is in jail.

Soaps.com: This is a sad time for Phyllis fans. On August 28, 2007 Phyllis was sentenced to six-years in prison, along with a fine of ten thousand dollars, for extortion (blackmailing Brad Carlton and threatening to expose his affair with Sharon if he didn’t vote for Neil to receive a board seat over Nikki at Newman Enterprises). Hope this helps catch you up! You can also read the past recaps to get the scoop!