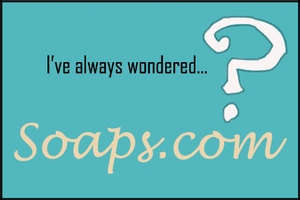 Whether you’ve been a soap fan for years, or just recently, there are always those questions that pop in our minds when watching our favorite soap that makes us stop and think, “I’ve Always Wondered…” In other words, we recently asked some of our loyal Soaps.com fans, “If you could ask one question pertaining to soaps in general – not a particular soap or storyline – what would it be?”

Well, as promised, we found the answers you were looking for – along with a special treat! While doing an interview with The Young and the Restless actor Christian LeBlanc (Michael Baldwin), he agreed to give us a hand in tackling your greatest wonderments regarding the soaps! So sit back and relax as Christian LeBlanc fills you in on some of daytime’s little secrets!

GTC124 asks: I have always wondered how far along the writers do the storylines in terms of when it is shown on air. I have heard that when a new soap is brought on usually the first year is already written but once the soap is on how far ahead are they.

Christian: “Although it varies, depending on the effects used for a particular scene, such as music, lighting, and how much editing needs done, usually the episodes are generally taped three weeks to a month from the time they are aired.”

Jentra asks: Do the writers have a team of people who read the message boards to find out what the fans want? And if they do, do they ever change storylines according to the fans’ likes, dislikes, desires or suggestions?

Christian: “Believe it or not, the fans are the most motivational, powerful factor around. The shows have a whole team of people who scour fan sites looking for fan reactions to certain characters and storylines. Although technology is scary to some, it’s great to have places like Soaps.com, a venue to find fan response! It’s a two way street… While the shows aim to bring the fans great entertainment, and hope they’ll give a certain character or storyline a chance, ultimately, the show wants their fans happy.”

Calliope asks: How much say does an actor have about things like hair color and wardrobe? If they want a hairstyle change do they have to consult with everyone first so they don’t end up with a change like in the middle of a courtroom scene etc? How much rehearsal time with each other do they actually get?

Christian: “While they have some say, the girls especially need to be careful about the changes they make because a lot of times scenes aren’t shot in order. And the show doesn’t want to have two different ‘looks’ showing up in the same scene!”

Although Christian and I didn’t touch base on how much rehearsal time the actors get with each other – sorry, (Amy laughs) we got sidetracked with all the wardrobe talk – from doing other interviews, I can tell you it varies. Some actors don’t need a lot of time – and nail the scenes right off – while others take as much time as needed!

Meowbowow asks: I've always wondered if the actors have a say in their hair/make-up/wardrobe or if it's all chosen for them.

Christian: "Every show has its own look, as does each character. Yes, the actors are able to give their input. For example, since the show wants to know how the actor views their character, they take us shopping! It’s a constant dialogue between the actors and the wardrobe department. I have to give praise the our make-up department on Y&R. They do an amazing job! When it comes to adding bruises for scenes such as when Nick Newman (Joshua Morrow) was in the plane crash, the results are so real!"

conway63653 asks: I wonder if the Actor/Actress gets to have any say in their storyline. And if they ever get 'burnt out' playing the 'villain' all the time or the 'goodie,' etc. It seems that once a character gets that good/bad storyline writers seem to stick to it....

Christian: "I believe every character has both a good and an evil side. My character, Michael, for example: After the whole ‘Christine kidnapping’ storyline, the late Bill Bell let me go from the show. He truly believed a character had to pay for their bad deeds and this was his way of showing the fans just that. Years later, when I was asked to come back to the show, it was easier for the fans to accept Michael as a good guy, one who paid for his crimes. Bottom line, there has to be something to watch, something to appeal to everyone. The actor has to make their character appear as though they’ve redeemed themselves. If you’ve created a well-rounded character, you’re able to turn from bad to good. Writers have to give you the script but the actor has to be able to interpret it into their character. With that said, yes, some writers are open to ideas from the actors."

BrianLovesSoaps asks: I have always wondered how scripted the lines are. Can the actor ad lib and sometimes say things he/she wants to or just what the prompter says.

Christian: "Well, the other actors have to know when you’re talking. However, actors can take a written line and turn it into something the writer never thought about. When a writer says, “Wow, I never saw that in my own words,” it makes you feel really proud – it’s the strongest suite of an actor. You can also add so much to the script with merely a look, a gesture, or a smile that makes the viewer melt! On our Y&R set, there’s always a conversation going."

Eppy asks: I've always wondered if sets are torn down when not in use and re-assembled again when needed. Seems as if they would take up an awful lot of room of they remained intact. I've been to the CBS Complex on Fairfax and just wondered if there was that much room to contain it all.

Christian: "Y&R has two stages/sets we work on. The popular sets such as Crimson Lights and The GC Athletic Club usually stay up all the time. With two stages, sets on both, we shoot on stage one in the morning then break for lunch. During lunch, our techs are tearing down the sets on stage one and preparing for another shoot. When we return from lunch, we shoot on stage two and the process repeats itself. Our techs are constantly milling around all day long."

Soaps.com wants to thank Y&R’s Christian LeBlanc for stopping by and helping us bring the fans these comprehensive answers to some really great questions! If we didn’t get to your question, don’t worry, we’d still love to hear from you for our next installment of our “I’ve Always Wondered…” article! And hey, you never know who will be stopping by the Soaps.com Lounge to help us deliver your answers next! Please visit our special Soaps.com Lounge thread and ask your questions today! We’ll be marking those posts that we’ve answered with ANSWERED, so be sure to look over all of the posts to make certain your question hasn’t already been answered!

Amy Mistretta
Assistant to the Editor-In-Chief
Editor: One Life to Live

Got A Minute? Watch A Soap!