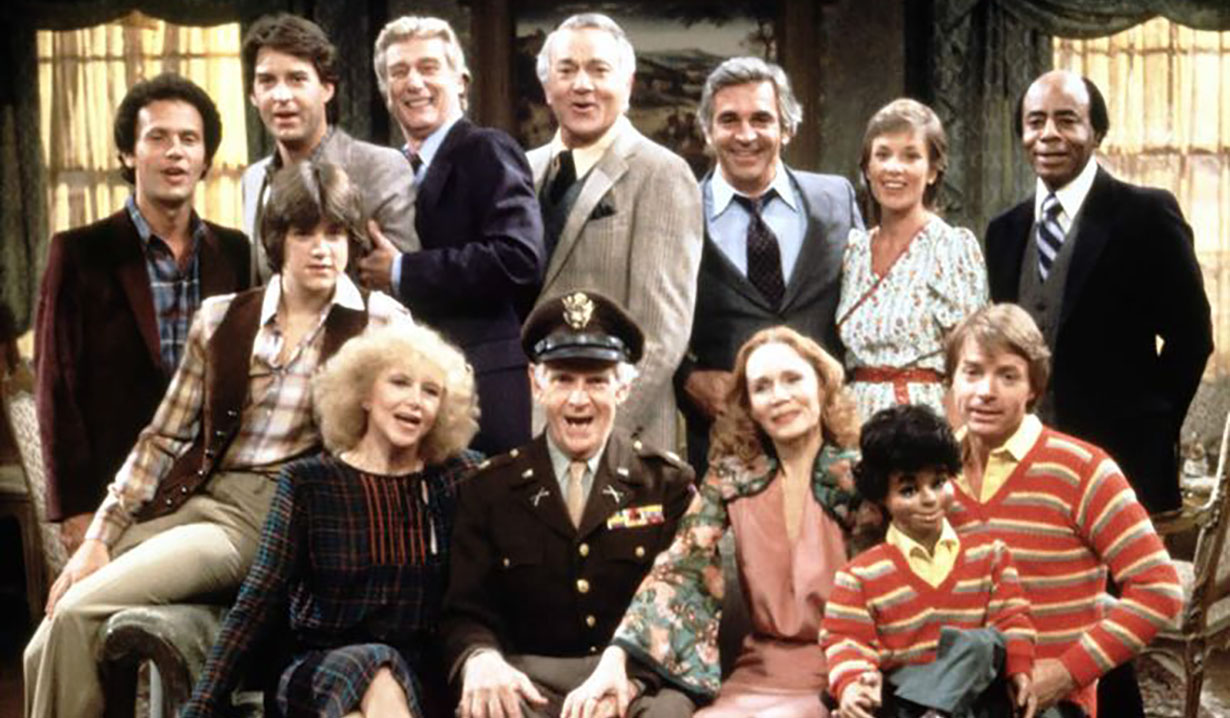 The 1977 debut of Soap was a hilarious parody of modern day soap operas.

Soaps have always been ridiculous, over the top, convoluted and deliberately scandalous— that has been constant in their history and it’s something which has made them so deliciously entertaining. The only thing that’s really changed is the mores they engage with and the degree to which they push the envelope. The melodramatic roots of the genre are comprised of a strange medley of things, from sentimental romance novels, detective fiction and the child’s morality tales of nineteenth century pulp fiction and vaudeville to the evangelical spirit of early radio. Almost from the very beginning, with their shameless mixture of the holy and profane, the soaps set themselves up for parody. The strange mix of blatant advertising, melodrama and overt preaching which were the mainstays of the genre when it was still on the radio were parodied by Spike Jones when he recorded ‘None But The Lonely Heart (A Soaperetta)’ in the 1940s as a fairly deliberate mockery of Guiding Light. The early radio days of the Light and similar series would later be ridiculed in the 1990 film Tune in Tomorrow, starring Keanu Reeves and Peter Falk as scriptwriters for an early radio soap.

It wasn’t until the shift to television that the parodies really started to hit their stride though. As soaps became less about preaching and more about lascivious stories lines or ‘sex and suffering in the afternoon’ as Time magazine put it, comedians began to take notice. It wasn’t only the comedians either. Even more interestingly, the heyday of mock-soaps was simultaneous with soaps at their most popular and there was more than a little blurring of the lines between them as veteran soap writers and actors crossed over to make light of their own genre. Carol Burnett seemed to start things off in the 1970’s when she unleashed As the Stomach Turns on her eponymous show. As the World Turns’ Eileen Fulton claimed to have come up with the title and concept. The plots in the ongoing skit focussed on demonic possession (before it became popular on real soaps), SORAS (Soap Opera Rapid Aging Syndrome) and illegitimate births. More significantly, it dramatically mocked the use of organ music still common at the time and the frequent, unintentionally hilarious, mistakes which were known to happen when soaps were still being broadcast live and largely unrehearsed.

Soaps sometimes get a bad rap for being tawdry when they try to be topical, but it was precisely this quality which became so attractive to a new generation of comedy producers. In the soaps, they found the perfect subversive genre. Innovative sitcom producer Norman Lear (All in the Family, The Jeffersons) saw precisely this when he decided to take on daytime conventions and created Mary Hartman, Mary Hartman (1976-1977). Even the title was an inside joke since Lear said it seemed like everyone on soaps repeats their dialogue at least once per episode (he must have been watching NBC). It was written by sitcom scriptwriter Gail Parent (Mary Tyler Moore) and real life soap writer Ann Marcus (Search for Tomorrow) and focussed on neurotic housewife Mary Hartman (Louise Lasser), her husband and their perverse friends and neighbors. While Lear kept the show stocked with all of the common cliches of daytime, he pushed them to the point of ridicule five nights a week with no laugh track, making the networks nervous enough about the content to keep it on the late night line up.

The seventies also saw the appearance of the longer lasting and even more controversial sitcom Soap. The show only ran once a week but it lasted for four years (1977-1981) and featured the talents of former real life soap actors Donnelly Rhodes (Young and the Restless) and Robert Mandan (Search for Tomorrow), as well as sitcom stars Katherine Helmond, Robert Guillaume, Billy Crystal and Richard Mulligan. Like Mary Hartman, Soap also brutally parodied the most conventional aspects of the genre, particularly the use of ludicrous cliffhangers, and pushed the boundaries even further when it came to content. The show was so controversial it almost didn’t make it to air thanks to its heavy focus on amnesia, incest, murder, kidnapping, alien abduction and homosexuality (it was basically like a fast paced version of Passions with a laugh track).

Perhaps the most famous parody of soaps in that period however came in the form of Academy Award-winning film Tootsie. It featured Dustin Hoffman as an out-of-work actor who dresses as a woman to get a job on a soap called Southwest General, which was a blatant take off of General Hospital and made light of much the same things that Carol Burnett had targeted nearly a decade earlier. Around the same time, General Hospital also found itself parodied by The Muppets in an ongoing sketch called Veterinarian’s Hospital. General Hospital would parody itself later when, in 1994, Luke and Laura (Anthony Geary and Genie Francis) appeared on sitcom Roseanne in self-mockery and she returned the favor, appearing on General Hospital briefly as ‘Jennifer Smith’. The same period saw several of One Life to Live‘s characters cross into Rosanne’s fantasy life.

The early nineties saw another cinematic parody when Soapdish (1991) hit screens. That film starred Sally Field, Kevin Kline and Robert Downey Jr. and was produced by nighttime soap producer Aaron Spelling. It mocked the on and off-screen antics of the cast and crew of a show called The Sun Also Sets. The coming decade would also find a string of short lived parodies coming from Moesha, Saturday Night Live, That ’70s Show, The Parkers, Queer as Folk and South Park.

The Simpsons offered two blatant soap parodies. The first, early on in the series was Search For the Sun which followed ‘Montana’ and comparably named characters as they used sex to close real estate deals. The more lengthy treatment came when sleazy and fugly bar owner Moe Szyslak underwent plastic surgery so that he could return to his career as a daytime actor. The new and beautiful Moe took on the role of conniving eye-patch wearing ladies man ‘Dr. Tad Winslow’ on a show called It Never Ends, a fairly direct parody of Days of our Lives though Moe was later rejected for being “Ugly ugly,” not “TV ugly.” The NBC soap got an even more thorough skewering from the sitcom Friends, however. Their celebrated stab at daytime cam when that show’s character ‘Joey’ got a job as an actor, Dr. Drake Ramoray, on Days of our Lives. Appearing on screen with him was a host of the show’s actual actors including Alison Sweeney (Sami Brady), although only Kristian Alfonso (Hope Brady) and Roark Critchlow (Mike Horton) appeared as their actual characters. The other actors took on new roles in plots which were invented purely for the sitcom. Even the show’s writer James E. Reilly got in on it, mocking his own reputation as a reclusive power mad writer when he kills Joey off the show for disapproving of some of his convoluted story lines. Producers of the show have suggested that the ruthless parody of Days of our Lives had more to do with the fact that Friends actor Jennifer Aniston is the daughter of Days of our Lives’ John Aniston (Victor Kiriakis) than anything else.

Even soaps have mocked themselves within their own confines. David Lynch’s nighttime horror/soap Twin Peaks featured segments from the abominably over the top Invitation to Love. Meanwhile, Sunset Beach featured a parody within it called Search For Dignity. When Annie Douglas (Sarah Buxton) started to feel like her life was too much like a soap opera, she began to daydream about her life taking place in a bad sixties-era soap. This sort of self-referential campiness became a staple of that show and would essentially become the basis of the show which took its place on NBC’s Passions where, in the early years, the characters overtly made fun of Days of our Lives and Passions itself. Although it’s been name dropped in mockery on Charmed, Buffy the Vampire Slayer and even in Nicole Richie’s best-forgotten novel The Truth About Diamonds, the show is already so much a parody of every soap opera cliche and convention that mocking it would seem redundant.

Care to take a peek at clips of a few of these parodies? Please view our playlist on Soaps.com on YouTube.

Got A Minute? Watch A Soap!