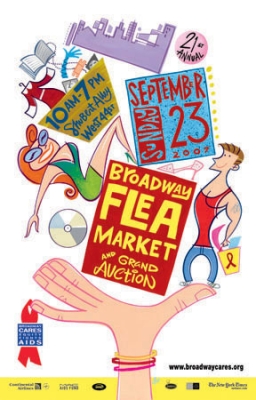 Are you going to be in New York Sunday September 23, 2007? Care to meet and greet your favorite Broadway and Soap Stars?
Soaps.com wants you to stop by the Broadway Flea Market anytime from 10:00 AM until 7:00 PM Sunday.

You’ll be able to SHOP for unique theatrical treasures, hand-made items, hard-to-find show swag and a heck of a lot more at the tables, run by Broadway shows and various theatrical groups all along West 44th Street! If this doesn’t sell you, maybe you’d prefer to POSE for autographs with your favorite soap stars and Broadway stars at the celebrity table and photo booth on the deck of “Junior’s Restaurant!”

Still not satisfied? That’s okay, if that’s not your thing… I’d be surprised if it wasn’t, frankly… you can BID on unique theatrical experiences and memorabilia at the silent and live auctions running all day long in Shubert Alley, or you can bid on other items at BC/EFA’s ‘Fleabay’ auctions on eBay!. There are some really cool ‘must have’ pieces that even I’m bidding on!! (Wish me luck!)

While we’ve got a list of actors slated to attend this event, we want to let you all know that changes to scheduled appearances can happen. Here is the list for you to browse and find out just who it is you’ll be meeting! Broadway Cares List of actors.

In addition to the celebrity table, there are a few other daytime related items that will be featured in this year’s flea market:

They’re auctioning off a day with Bobbie Eakes (All My Children Krystal Carey Chandler) (on eBay)! These types of auctions are so much fun. Check out what you can enjoy…

**Please note this package does not include travel or accommodations in New York.
Prizes in the ABC

• A chance to appear on the ABC podcast and interview someone from the show
• A chance to have your name said on the air of All My Children or One Life to Live.

They will also be selling autographed photos and wardrobe used on the shows (AMC and OLTL). This is your time to get a piece of the show or your fave actors!! And, it’s for a good cause!

And guess who Amy Mistretta (Assistant to the Editor-in-Chief and OLTL Editor) spoke with, regarding the auction? The talented and lovely, Ilene Kristen (One Life to Live Roxy Balsom)!

Of the auction, Ilene reminds us, "I have done it for several years, and if I'm free I always want to do it!" She tells us that this one is not the only charity that is close to her heart. "The Gabriel Project (I'm assuming you know about this organization) a theater company always in need of extra funding called the Ensemble Studio Theatre of which am a member."

Amy asks Ilene, "If you could do anything to make AIDS awareness more prominent in our nation, what would you do?" Ilene tells her that she'd make more government funding available, have better education for teenagers on safe sexual practices and of course, more TV public service ads! She gets back to the topic at hand and wants to relay her thoughts on AIDS. "We are far from done with this virus. I have several friends who are HIV positive who might not be alive if not for the "cocktail". But I still think we can do better and do more research pertaining to the immune system to find out how to prevent this once and for all."