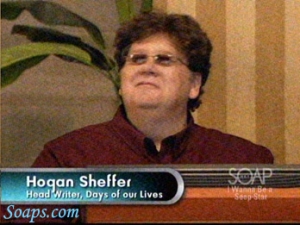 Cameron Mathison- Host of 'Wanna Be'

On this week’s show, of SOAPnet’s “I Wanna Be A Soap Star”, the six remaining contestants in episode 6 must act in a scene where they cope with a dying loved one. Bring out the Kleenex for these tear-jerkers! The show is entitled “Another Day Dying”, and the “wanna-bes” will have to dig deep to find true emotion in order to avoid their own death during the elimination. Who will survive?!

Days of Our Lives guest actors James Reynolds (Abe Carver) and James Scott (E.J. Wells) participate in the scene and during the elimination, we’ll find who is to be “killed off.”

Exciting news! "Wanna Be's" handsome host, Cameron Mathison will reveal the winner during SOAPnet's first ever live season finale from the Hollywood & Highland Complex on October 16 (live to the east coast at 11 PM. EST and is live to tape airing at 11 p.m. PT on the west coast). Voting begins immediately after episode 9 ends on Tuesday, October 9, and voting will stay open until 11 PM. ET on Wednesday, October 10. America can vote via online at SOAPnet or via a 1-800 number that will be revealed during episode 9.

Things are getting exciting. Thoughts on who should win?

In case you missed it, seven contestants remained on “I Wanna Be A Soap Star” and in episode 5 the contestants had to learn how to perform a strip tease. They worked with an instructor who taught them how to undress like a pro and remain in the running for the next episode!

Days guest actor Bryan Dattilo (Lucas Roberts) was on hand, as well as Julie Pinson (Billie Reed). They gave tips on playing a character with a double life!

‘Reginald The Vampire’: Jacob Batalon To Lead Dramedy In Development At Syfy