Do You Remember Texas? 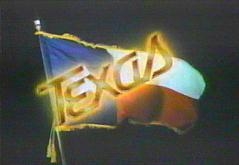 While it’s become par for the course for TV shows to make their way onto DVD, soap fans unfortunately aren’t likely to be so lucky. The sheer quantity of episodes that most soaps have aired makes releasing them almost impossible to imagine. Although I’m sure that there are some die hard fans who would have an addition built onto their house to accommodate DVDs of every episode of DOOL, it’s not something that producers bank on. But fans of some old shows have cause for celebration and may have some hope that their past joys may not be lost forever to the public. If you feel like nostalgically reliving some moments from that time or discovering something new, you can now catch reruns of Texas online. The complete 617 episodes of the show are currently being made available on the AOL/PG Classic Soaps home page here free of charge. As an added bonus, you get to watch them without commercials at your leisure and in any order you please.

Texas aired on NBC from August 1980 until the end of 1982. It was a fabled time in television history, right after the peak of soap opera popularity in the late 70’s. NBC was searching for a show to capitalize on the southern bravado popularized by shows like Dallas. It developed Texas as a spinoff from the highly popular Another World, exporting that show’s popular villainess Iris Cory Carrington (Beverlee McKinsey) character and other characters from the show into a new milieu. Hopes were high for the show, which, unfortunately aired in direct competition to General Hospital when it was at the pinnacle of popularity and Guiding Light when it was in one of its most popular periods. While the show largely grated on critics and never found a substantial audience, it did a lot to establish the careers of many of the producers and actors who worked on GL through the rest of the 80’s. Check it out to see if this diamond in the rough still glistens.