A Whole Lot of Kissing Going On

Luis and Fancy look for a place to make love, Miguel only has eyes for Charity, Jared kisses Theresa good-bye, and Sheridan keeps seeing visions of Luis and Fancy in her head.

Gwen is in her room coughing and sneezing. She is glad to see Rebecca arrive because she needs help with Jane. Rebecca has other plans. She plans on going on a romantic getaway. Gwen begs her to stay but Rebecca is sure she would rather have her go away since it's with J.T. She is getting him away from Harmony and from Ethan and Theresa for good.

Rebecca tells Gwen that JT is tying up a few loose ends before leaving town. He is working on a lucrative deal that is going to make millions and he's going to share it with her. Gwen figures out it has to be another blackmail scheme. Rebecca admits that as a tabloid editor, J.T. knows quite a few dirty little secrets that people are willing to pay to keep covered up. Gwen informs her that blackmail is a capital crime. "Only if you get caught, and he's not going to let that happen."

The phone rings. It's J.T. wanting to know if she found her passport yet. They don't have much time. As he talks, he cuts out words from a magazine for his blackmail note.

Rebecca tells Gwen to stop worrying about her and get well. Gwen can't help but worry when her mother is talking about conspiring with a blackmailer. "Curiosity killed the cat." Rebecca doesn't worry about nonsense like that.

Gwen calls Ethan and tells him that she is fine and that her mother is there. As soon as she hangs up, she lectures her mother about crime and the possibility of her ending up in jail. Rebecca is not convinced anything bad will happen to her.

JT is reading his blackmail note when he gets a call from one of his sources. The source tells him even juicier secrets. Suddenly he hears a noise at the door and hangs up to check it. He looks through the blinds at the window and sees a shadow with what looks like a gun. He pulls his gun out. JT opens the door quickly and fires three shots outside.

Jared and Theresa are kissing at the wharf. Theresa can hardly believe it was Jared that had the other half of her coin. Jared is just as surprised. And to think, she wasn't even going to show up there if Whitney hadn't convinced her to go to meet the man of her destiny. They kiss again.

Jared and Theresa finally pull apart. She smiles but he tells her things haven't changed. She believes everything is falling into place now. For him, things seem more out of place than they've ever been. Jared is not going to let some faux gypsy tell him how to live his life. So they have the same coin. Big deal. They still don't have a future together.

Jared thought she was the one. Theresa tells Jared that she is the one for him. She points out what the fortuneteller told her. Jared says maybe in another time and place, but Ethan is still in her heart and soul. He loves her but he is leaving town for good. She oaks him to kiss her just one last time. He does so and then quickly leaves. Theresa sits alone.

Whitney doesn't believe what the fortuneteller told her. Chad comes over to her and kisses her. The shower got him to thinking that the two of them should get married right away. Whitney thinks not

Chad thought they were past the suspicions. Whitney mentions talking to the fortuneteller. Chad can't believe she is getting advice from hired party entertainment. He asks if the fortuneteller told her that he was cheating. She asks why is he getting so mad at her. Is it guilt?

Chad wishes she trusted him. Whitney says she needs to ask Chad something that has nothing to do with the fortuneteller. Rebecca saw Chad at the motel, naked in a room and waiting for someone. "Just tell me who you were waiting for?"

Chad tells Whitney that Rebecca is a nut case. He swears on Miles that there isn't another woman in his life. The fact that she doesn't believe him is telling him that she doesn't want to marry him and that kills him. "Where does that leave us?" She needs time to think. When she makes her decision she will tell him. She rushes off leaving Chad calling after her.

Luis kisses Fancy. She thinks it's a dream. Luis tells her this is for real. "I, Luis Lopez-Fitzgerald, love you, Miss Fancy Crane." They kiss again and decide to slip away from the shower to make love. Luis and Fancy can't keep their hands off each other. She gives him the car keys but he is too busy kissing her to worry about the car.

Luis and Fancy finally get to the car. They act like high school kids who just discovered sex. They can't stop kissing each other.

Making love in the car isn't going well. First Luis gets a cramp. Then the car alarm goes off. After he finally gets the alarm off, they notice they have a small audience.

In the car, Luis has given up on trying to make love there because of all the distractions He suggests that they go to a romantic inn. He reaches over to kiss her and breaks his stick shift gear. Since they can't drive, they decide to go somewhere they can walk to. Luis suggests his house. Everyone is at the shower and they will be alone. They jump out the car to go.

Simone greets Sheridan as she arrives at the shower. Sheridan has brought a gift for Tabitha, not the happy couple. Sheridan found it in the mansion and thought it would be perfect for Tabitha. She goes off to take it to Tabitha when suddenly she has a vision. It is of Fancy and Luis just kissing at the shower, Simone comes up to her and asks if she is okay.

Sheridan tells Simone that she just had a flash out of the blue. Simone thinks she looks shaky. She asks if the flash had anything to do with Luis and Fancy. Paloma told her that Luis and Fancy might be getting together. Sheridan snaps. She doesn't have time to worry about Luis and Fancy's love life. She is too busy with her own family. Simone apologizes for bringing them up. Sheridan walks off to find Tabitha.

Simone isn't going to let Sheridan's foul mood spoil her night. She wonders where Kay is. This is supposed to be the happiest time of her life.

Tabitha looks into her magic bowl and sees trouble-- Miguel and Charity kissing. Tabitha sees more than Charity back in Harmony. She sees Death coming to Harmony, too. It is coming for more than one person.

Tabitha says that there isn't anything in the bowl. Endora zaps the pictures away before Sheridan peeks into it. Tabitha was just teaching Endora about the similarities between ripples in water and life decisions. Just one decision can affect so many for many years. Sheridan agrees. She remarks about how pretty Endora is and how she reminds her of herself when she was a baby.

Sheridan starts coughing and Tabitha offers her a drink. Endora zaps an orangey fruit drink on the counter. Sheridan thinks that she should have noticed that drink there before.

Suddenly she has the vision of Luis and Fancy kissing at the shower. She stumbles. Tabitha notices all is not well with her. Sheridan asks if Tabitha ever sees things that aren't there, like they're forcing themselves into her mind Tabitha says no. Maybe Sheridan has been trying to push something so troubling out of her mind that they insist on popping back in. Sheridan claims that's impossible. Her life is perfect.

Sheridan wishes that she had known her son at Endora's age. She accidentally refers to James as Marty. Sheridan sees Endora's ball in the room and remembers buying the same one for Marty. In her mind, she hears the sound of a ball bouncing.

Sheridan says she will never get over losing Marty. She casually looks down into the magic pot. "Oh my God!" She sees Luis and Fancy kissing in the car.

Fox and Kay watch as Miguel and Charity kiss. Fox marvels at Miguel and Charity's affection for each other. He knew Miguel wasn't over Charity. Kay is stunned that Charity came back. Fox suggests there may even be a double wedding with the pair.

Fox wants to leave the two alone and go greet their guest, unless Kay still wants to have that talk with him. Kay is fixated on Miguel and Charity. She tells him the talk can wait. He can go out to the guests. She will be there in a second. Fox kisses her and leaves

Fox is on the phone telling his father that his plan worked like a charm. Now the wedding will go off as planned as long as Kay doesn't find out what he did. "Find out what, Fox?" He turns around to see Simone is behind him.

Miguel and Charity finally separate. He tells Charity that he loves her and only her. Kay remembers when he promised never to leave her even if Charity came back. She realizes his promise was all a lie! She runs out the room.

Fox quickly ends his call. Simone repeats her question. He tells Simone he has a surprise lined up for the honeymoon. Simone is happy to hear that and runs off to find Kay. Kay finds her first. She is crying as she runs into Simone's arms. Miguel doesn't really love her. "He loves Charity."

Sheridan tells someone Luis has nothing to do with her life.
Fancy overhears Pilar making someone promise never to get involved with a Crane.
J.T. finds Rebecca on the ground unconscious outside his door.

The Curse of the Cranes 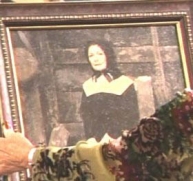