Fox has a fiendish plan to keep Kay. Rebecca tries to resist temptation. JT decides on who will win his secrets. It may be too late for Fancy.

Kay is embracing Miguel, telling him that she's always loved him and can't wait to marry him. Miguel wonders about Fox. She is reluctant to tell him; he's been so good to her. Fox is still watching from the window, vowing to himself that he'd rather die than lose her to Miguel. In a flash, he has a plan. 'Is my idea brilliant or totally whacked?' he wonders as he begins to remember Julian's advice. Miguel is promising Kay that everything will be perfect from now on. Kay is sure that she's making the right decision. Fox gave her what she needed when he wasn't around, but now he's back. 'He is going to die,' Kay worries. Fox turns away from the window. 'You feel guilty now Kay, but just wait.'

Fox eagerly waits in his room, hoping that his plan will work. Kay and Miguel come to the door, which Fox has left open, while he 'talks' on the phone to a doctor. 'Am I going to live or die?' he asks while Kay is stunned and Miguel's jaw drops. Fox starts to laugh while Miguel and Kay start to worry, but it turns out that the test results are worse than the doctor thought. 'I can't die. I'm about to marry Kay,' Fox says. He doesn't want to tell her now; it would ruin their wedding. He can't believe that he'll have to leave so soon after things are official. 'I love Kay too much to burden her with my problems now.' Kay can't believe how wonderful Fox is for not wanting to burden her. Miguel is not amused when Kay says that this will change everything. She can't call off the wedding now. Miguel's suspicion grows as Kay says that she can't believe how selfless Fox is being. He hangs up, listening to Kay crying in the hallway. Miguel still thinks that she should leave Fox; no matter what. Fox walks into the hallway, claiming that he just woke up. Miguel announces that there's something they need to tell them. Kay's face is a mix of heartbreak and worry.

Rebecca sneaks by a sleeping Ethan. She peaks under his blanket to see what she's been missing before crawling up beside him and pretending to be Gwen. He rolls over onto her. Her fingertips brush his biceps as she tries to tell herself that she's only doing this to protect Gwen while she gets rid of JT. Rebecca tries to keep Ethan asleep, but worries that, if Gwen doesn't get back soon, she won't be able to control herself. She jumps into the bathroom and tries to explain the situation to herself, weighing her options with an unconscious Ethan. 'Could I? Absolutely. Should I? Probably not. Will I? Who are kidding?' She searches through her bag of toys and pulls out a blond wig: A mother's work is never done. She stands in the doorway and recalls her past escapades before climbing back into his arms. He comes to, appalled to find her with her hands on his 'muscle.' But this has only been a fantasy. Rebecca realizes that this is not a good idea and puts the wig away. She decides to get herself a drink to cool down. Ethan starts to wake up and call out to Gwen.

Theresa and Gwen almost literally run into each other in the hallway. They downplay their large bags of cash and try to pretend that they aren't there to see JT. This doesn't last and they finally rush to his door. JT opens up and proclaims that 'whoever gives me the most money, get's their honey: Ethan Winthrop.' They hit at him with their bags and tell him he'll need the money for reconstructive surgery if he keeps trying to play them against each other. He threatens to tell Ethan enough lies to make him hate both of them. They back off and he sits down to daintily count the money. Whoever brought the most wins. He peevishly watches them stack the cash on his desk. JT wonders what it is about Ethan that could have has them fight over him all these years. They try to explain, but he doesn't really care and goes back to counting. Gwen tells Theresa that, with all the money from Rebecca's divorce settlement, there's no way she can win. After completing his lengthy tally, counting and recounting, he announces 'Gwen'-- who suddenly starts cheering and taunting Theresa, believing she's won, until JT tells her that she lost, but she was 'really close.' She was short by just a hundred dollars. Gwen furiously searches through the bag, wondering where the cash is while Rebecca fondles it, wondering if it could have cost Gwen Ethan. Gwen tries to pay JT with all the change in her pockets, but he won't budge. 'Ethan will be mine,' Theresa gleefully declaims. Now she's going to get Ethan and expose all of Gwen's secrets. Gwen is filled with dread now that she's about to lose Ethan and Jane.

Luis, Paloma, Sheridan and Chris are searching for Fancy in the caves. Luis continues to prod Chris about why he's there and what he really has to do with Fancy. Deep in the hole, Fancy tries to cry out while the ropes continue to give way. Luis keeps harassing Chris, who claims that he only came there because this place sounded like the place Fancy had described to Luis. This seems highly suspicious to Luis and Paloma. Fancy suddenly comes to and begins screaming. Sheridan continues to insist that Chris couldn't have had anything to do with Fancy's disappearance because he was with her. Fancy continues to shout until Luis starts to follow her voice. They find the hole and look down as she calls up. 'This is not going to be easy,' Luis admits as Fancy sways below. She begins slipping while Luis continues to wonder what Chris is doing there with a rope since he isn't exactly 'the boy scout type.' He tries to lower a rope but some of the boards give way. They narrowly miss her and she gets a hold of the rope, tying it around her waist. He tries to pull her up, but the knot comes undone. She starts again while the cords continue to tear and Luis yells down at her. They give way and she falls.

Next on Passions: Will Fancy survive the fall? Theresa takes JT to see Ethan. Gwen wonders what Rebecca has been doing with her husband.

Giving all up for love 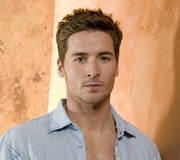