I Could Never Hate You

Outside of Tabitha's, Kay kisses Miguel while he tells her the car is fixed. They hurry back inside and upstairs. When they get up there, he tells her that he never wants to hear Fox's name again. She pulls his shirt off and they leap into bed. Downstairs, Tabitha tells her daughter that she needs to stop ruining the plans of the boys in the basement. They want Miguel dead and she can't stop it. There are greater powers than them and if they defy them, they will be punished. Norma and Edna drift into the room, crying in panic. The house begins to shake again as fire erupts from the basement and a demon yells at them, demanding that they return to Hell for their punishment. Edna begs Tabitha to save them; it was her daughter that ruined their mission in the first place. Tabitha, however, isn't about to help the people who have tried to chop her into little pieces numerous times over the years. The demon calls again, threatening to come up. Tabitha picks up Endora and tells her house guests not to get too much blood on the carpet. At first hyperventilating, and then becoming defiant, Norma and Edna try to come up with a plan. They try to work out an evil deal: Maybe they can kill Miguel in exchange for being let go? 'Kill Miguel and we'll see,' the demon says slamming the door to Hell. Norma's ready to get down to business so they check in the bowl and find him upstairs. As they try to pick a murder weapon, the demon calls up again to hurry things along. Reaching up, he offers Norma her old axe. She's ecstatic and hacks up some furniture before they hurry upstairs.

Tabitha and Endora come back and spot Norma and Edna trying to kill Miguel in her bowl. Endora wants to save him and sends a giant bubble up to shield Miguel and Kay from the ax. After a few hacks fail to burst the magic bubble, the ladies start beating each other up. They soon go back downstairs where Tabitha and Endora laugh at them. This is bad news though; the head demon will be out for blood this time. Flames begin to shoot from the basement. 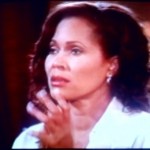 Eve asks Vincent why she shouldn't call the police on him. Once he makes it obvious that he's her son come home at last, she smiles wildly before remembering that he's a serial killer. Then she remembers that he's her son and smiles again before she stops and asks him if he's gay. 'Don't be so provincial sweetie. I swing both ways,' he explains. He doesn't understand why she is so upset; he's a chip off the old block. She repeats that she never knew that he was kidnapped and wishes that she could have rescued him. Her 'big talk' doesn't impress him though. Whitney and Simone got everything while he had nothing, so, they had to pay. Eve is appalled but she can't convince him that he's wrong. He knows that she was a prostitute and the only reason he exists is because she was too wasted to remember birth control. 'It was losing you that made me get my life back on track,' she says. Somehow that fact doesn't give him much comfort. Maybe she should have stopped drinking and using drugs when she was pregnant and he wouldn't have been deformed. Whitney returns, wondering why her mother is 'wasting oxygen' talking to the man who destroyed her life. Eve tries to explain, but Whitney continues to lash out at Vincent, accusing him of coming from a 'degenerate gene pool.' He starts to laugh and refuses to leave. When she goes to call the police, Vincent tells Eve that she's a sad excuse for a mother if she is so ashamed that she won't tell her daughter the truth. He tells Whitney to put the phone down and walks to the door, promising her that they will know each other real well before this is over. Whitney doesn't understand any of this and Eve has no idea what to do. She's so freaked out that she can't think straight. To calm herself down, she begins taking pills.

At the mansion, Theresa thanks Gwen again for not telling Ethan the truth, she hopes that she can find happiness someday. When Theresa walks upstairs to look for Jared, Rebecca wonders how her daughter can bear this. Gwen is just enjoying thinking about all of the pain Theresa will soon be suffering. When they move back into the parlor, Ethan is still standing there and Gwen starts to tell him about the new man in her life. She doesn't say much though because she doesn't want to jinx it. 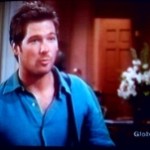 Upstairs, Theresa finds Jared packing. She tells him that she did love him, but he doesn't believe her. He's always been 'the other guy' and she only married him to protect her secret. He knows that Ethan is really little Ethan's father. There are a lot of people who would like to know that secret, but it's safe with him. She assumes that he must hate her for this. 'I could never hate you,' he says, hugging her. She's sure that one day he'll find another woman who can love him. After he's packed up, she takes him downstairs with his bags. They find Ethan hugging Gwen. They break it off when they spot Jared. As Gwen drags her mother away, Ethan tells her that she can see Jane whenever she wants. When the ladies get in the hallway, they continue their plotting until Jared interrupts them. He warns them that if they insist on hurting Theresa and Ethan, someone will come back to haunt them. It's time that they all got over this. Once he leaves, Rebecca says that she doesn't like threats, but Gwen doesn't care: Everything bad has already happened to her and now Theresa will pay. Meanwhile, Theresa goes back to Ethan and tells him that they can be together as soon as her divorce goes through. He just wishes that he could trust him enough to tell him his secret. As long as it's not about them, it will be okay. She insists that it's not about them. He imagines it must be about business so it doesn't matter.

Eve tells Julian the truth about their son.

Ethan look for a miracle to save Luis.

Thank-you for your comments and feedback! We do ask that our visitors abide by the Soaps.com Guidelines. Please feel free to CONTACT US if a moderator is required to handle any bad posts. Above all, have a great time posting!

Gain a Brother, Lose a Brother