Changing for the Good

Tabitha and Esmeralda revisit their youth in song, Julian tells Miguel about his deal with Kay, Ethan tells Jared that he and Theresa are together now, Whitney tries to have Chad arrested for kidnapping.

At the school for Good Witches, old rival Esmeralda never thought she'd see Tabitha again, certainly not in her school. 'You owe me and I've come to collect,' Tabitha says, recalling what Esmeralda put her through. The good witches start to whisper among themselves; all magic creatures know that Tabitha and Esmeralda are old enemies. It wasn't always like that though. They were roommates once and it was an utter disaster. Remembering, they flash back into a long musical sequence. The young Tabitha arrives at the witch school while Esmeralda starts trying to give her a make-over from 'perfectly frightful to perfectly delightful'. The two ladies smile at each other as they remember and the good witches beg for more details. Tabitha sits down with her daughter and tells her that she was awkward when she was a little girl, not like popular cutie Esmeralda. The Good Witch reminds her that she was such a loner that she put people off; she didn't even go to the munchkin toss. Tabs claims that she was just desperately shy.

They flash back again to Esmeralda trying to convince Tabitha to be lighter and laugh more, learn dances and make friends. She doesn't want any friends, she insisted. When the good witch teases her about being a 'green loser', Tabs starts to cry. 'It must be hard for you, rooming with someone who is truly perfect,' Esmeralda says, before offering to help her out. First they have to stop her from being green, 'not that I'm prejudiced or anything.' Tabs explains that her great grandfather was an enchanted prince, a frog who never got kissed. As Esmeralda dabs Tabs with makeup, the flashback ends as Tabitha explains that she changed her skin, not with makeup, but with magic. But popular and pretty were never for her; she was more interested in being powerful. She wanted to be noticed not for her looks, but for her brains and ability. 'She learned more about magic than the rest of us put together,' Esmeralda admits. They flash back and kick out another show stopping musical number where Tabs vows to use her magic to be the greatest witch and leave them all behind. 'Knowing you has changed me for good,' Tabs admits, hugging Esmeralda. Back in the present, Tabitha explains that her daughter wants to be changed for the good and Esmeralda is the only one she can trust with her. Esmeralda promises not to make the same mistakes with Endora that she made with her mother once upon a time. Tabitha leans down and promises her daughter that she'll make lots of friends and be happy there. Endora doesn't want her to go, but she insists that this is for the best. After placing her daughter's hand in the good witch's, Tabitha jumps on her broomstick and flies away.

At Tabitha's, the demon elf brings the possessed Fox downstairs and sends him to attack Miguel, who just happens to be making love to Kay on the massage table in the kitchen. As Fox chokes Miguel, Kay tries to wrestle him off. The elf grabs her by the hair and pulls her away. Suddenly, Julian walks in, shocked by what he's seeing. When he tries to stop his son, Fox pushes him across the room. Fox snaps out of it when Julian stands up and remarks that he seems to be feeling better. Miguel claims that he has nothing to feel sorry for; Kay loves him and she will soon get a divorce and come to him forever. Fox attacks him again, but Julian breaks them up and then explains that he made a deal with Kay. She can't deny it while Julian explains everything Kay promised to Julian. While he seems angry at first, he embraces her when he realizes that this only proves how much she loves him. As he thanks her, Julian tells them to save it: Now the deal is off and Miguel will be going back to jail. The demon elf does a dance. 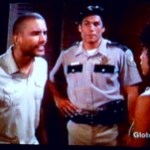 Eve, sporting a new hairdo, returns home and tells Whitney that Spike buried Jessica alive but they managed to rescue her just in time. What's going on in this town? she wonders. On the good side, Whitney tells her mother that Theresa and Ethan are engaged. 'So maybe things are finally looking up?' Eve is also excited that she will soon see her long lost son. She wonders what he could look like; gorgeous like her daughters perhaps? Whitney smiles and goes upstairs. Moments later, Eve hears her scream. Her daughter runs down and tells her that Miles has gone missing. Eve confesses that she left Miles with Chad. 'That degenerate!' Whitney says. She gets on the phone and calls the police to report a kidnapping before running over to Chad's. Eve follows her daughter over to Chad's where Sam soon arrives. Whitney tells Sam that Chad is gay, although he denies it. When Whitney asks Sam to arrest Chad, he refuses; Chad is completely within his rights to have his son. 'What if my baby walks in and finds him in bed with another man?' she asks. 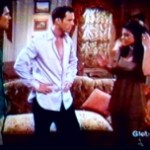 At the mansion, the possessed Jared pounds on Ethan and throws him around the room while Theresa lays unconscious on the floor. Gwen and Rebecca walk downstairs and watch as Jared chokes Ethan. Rebecca wonders if they should help. Gwen says no; Ethan's not her husband anymore. The brawling boys snap out of it and Ethan runs to Theresa. As he helps her up, Jared asks what happened. Gwen and Rebecca walk out. She doesn't want to get involved in this. It's obvious that Theresa is going to end up with Ethan, but it doesn't matter: 'The joke's on her.' Rebecca wonders what she means by that. 'Theresa is not going to end up with anyone because Theresa will be dead,' Gwen explains. Meanwhile, Ethan demands that Theresa just tell Jared the truth: They're going to be together from now on so he has to get used to it. As soon as the blackmailer is caught, Jared will be gone. Jared vows to find the creature himself and get to the bottom of this.

Next on Passions:
If Gwen doesn't kill Theresa, her secrets will.

The blackmailer waits for Ethan.