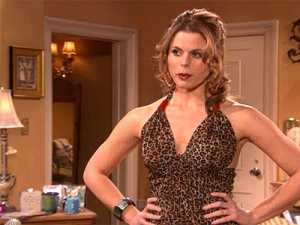 The fans of impetuous and more than mildly crazy Esme will have something to look forward to over the next two weeks. The excellent Erin Cardillo is set to return to television screens in the role of the trigger happy, man-eating heiress. She will have more advice to dole out to her hapless friend Fancy, who once again will fail to listen. Last time we saw her she was telling her friend how to get Luis over his love of Sheridan, or at least to let her have a go with him while Fancy was still pining over Noah. She’s not the sort of girl you can turn down. It was only months before that she almost blew Noah and Fancy away with her shotgun in a jealous rage when Fancy refused to share her boy-toy. While Esme has been off the scene, things have changed a lot for her friend and it should be interesting to see how Fancy can handle her wily ways when she thrusts herself into the middle of her grieving. This time around, Esme is resolved to help her friend through the hard times in the only way she knows how: Another mad plan.

While away from Passions, Erin Cardillo has been busy shooting three films. The Box, which will be released later this year and the Paris Hilton vehicle The Hottie and the Nottie as well as Dante’s Inferno, set to be released in the fall and next spring. She has also been featured on How I Met Your Mother and been working in small independent films. She is scheduled to appear on April 27th, May 3rd, 7th and 9th.

Passions Will Live On!