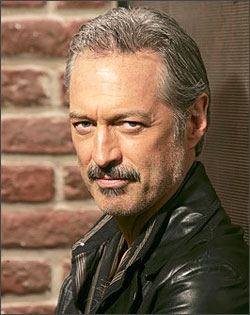 Viewers of Passions will be getting a treat next week when veteran soap opera actor Roscoe Born arrives on the set. He will be portraying the warden of the prison where the hapless Luis and Miguel Lopez-Fitzgerald are being held while they await their fates. Born has been acting in soaps for the last twenty five years. After stints on Ryan’s Hope and OLTL, he took his most most famous role, Robert Barr on Santa Barbara. In addition to that role, he also played Barr’s evil twin brother, Quinn Armitage, and earned an Emmy nomination for his outstanding work.

Always a reliable and profoundly human villain, Born mostly recently made waves when he played Tom Fisher on The Young and the Restless. What cruel games will he play with the handsome, innocent and almost perpetually clueless brothers of Harmony’s favorite family? You’ll just have to tune in and see. Born will appear for a limited engagement beginning on Tuesday April 24th.