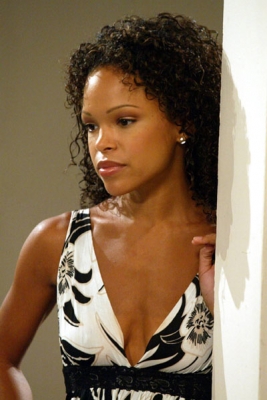 Passions has always flirted with the horror genre, to the chagrin of some and the delight of others. That is, after all, why Spike on Buffy the Vampire Slayer was such and ardent fan of the show. The use of witches, ghosts, demons, zombies, portals to hell and mysterious entities have been fundamental to its plots since the beginning and set it apart from most soaps. Now two of the show’s stars will be featured in full-blown horror films.

Fans of Brook Kerr (Whitney Russell Harris) will get to see her in a whole new light in upcoming months. She has just signed with HBO for a major role in their upcoming series True Blood. Based on The Southern Vampire book series by Charlaine Harris which tells the stories of vampires and psychics in a small Louisiana town. Brook will play a clever and crafty young woman who gets a job working in a bar with a psychic played by Anna Paquin. The show is being directed and written by Alan Ball, the same man responsible for HBO’s Six Feet Under and the film American Beauty. Shooting for the series is set to begin in June.

Meanwhile, fans can catch Mary Elizabeth Winstead (former Jessica Bennett) on screen right now in the new horror-thriller Grindhouse. She appears alongside Rosario Dawson in a leading role as Lee in the segment entitled ‘Dead Proof’ directed by Quentin Tarantino. It’s a lurid and shocking feature about speed freaks who like to tempt death by riding on the wind shields of speeding cars, often resulting in brutal accidents. Winstead has been very busy since leaving Passions, appearing in horror films the Ring Two, Black Christmas and Final Destination 3.