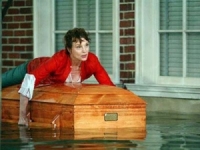 NBC has officially announced the cancellation of Passions after several months of speculation. The demise of the show was expected with plans of a newly expanded Today Show and a string of other cancelled daytime programming such as the Megan Mullally Show. The show is expected to finish production in the spring, with episodes airing through August. Negotiations between the network, cast and crew for the completion of episodes have yet to be finalized. While the show has had low ratings historically, it has always maintained some of the most consistent and healthy ratings stats among women ages 18-34, the most lucrative and difficult demographic for soaps to maintain. Industry experts are expecting this as the beginning of a new trend which will see the end of several other major soaps in the next two years.

NBC was explicit in its announcement that it still believes the show has a potential audience and will entertain other avenues for it, either through internet or cable. We will keep you updated of any further developments and encourage everyone to continue showing their support for the show through petitions and letters to the network. A future for Passions is still possible, just not on NBC.