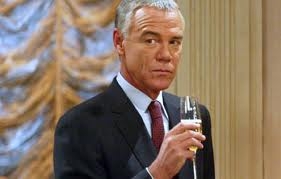 The Children Escape, the Adults are Captured, and Secrets are Revealed.

Now that “Passions” is no longer on the air, Soaps.com is honoring the show by offering fans a chance to imagine life in Harmony from a fictional perspective. Hoping to recapture the over-the-top storylines and corny magic of this soap, we began fantasizing about our beloved soap in 2011. When last visited our version of Harmony, the children were being held captive by Tabitha’s nemesis, Hecuba.

As Endora floats towards the growing blob while under Hecuba’s spell, Endora screams to her fellow Harmonians to repeat the anti-spell along with her. As all of the children continue to chant, “Return us to a place where it’s always a beautiful day in Harmony,” Endora becomes stronger and is able to finally reach her mother, Tabitha, through the magic bowl. In Tabitha’s kitchen, Tabitha alerts Kay to gather all of the parents because she has discovered how to find and enter Hecuba’s lair.

As word about rescuing their children spreads around town, Endora’s powers grow strong enough for her to free herself from Hecuba’s grasp and hold off the weakening blob. Hecuba continues to taunt the children that no child’s pathetic powers are a match for her greatness because she has overturned governments, toppled towns like Springfield, Oakdale, Pine Valley, and Llanview. A video of each of the towns bittersweet endings materialize on the wall and mysteriously draws each child into a trance. She warns that they should follow her demands and join her on the dark side or suffer an intolerable demise. Endora yells, “Jane! Maria! Little Ethan! Marty! Don’t listen to her! Our parents will save us! Don’t listen to her!” Just as Marty breaks away from his trance and lunges towards Hecuba, Tabitha and Kay blast through the cement wall! Hecuba says, “So glad you could make it Tabitha, I have been waiting for you!” The witches engage in a blow for blow, blast for blast battle allowing Sheridan, Ethan, Miguel, Paloma, Fancy, Noah, Julian, Theresa, Kay, Jessica, Whitney, Sam, Luis, and Eve to reunite with the children. As Hecuba and Tabitha are locked in the ball of fire they are both shooting from their hands, the adults tell all of the young people to get out now. Just as the last child escapes the lair, Tabitha’s wins the battle by blasting Hecuba against the wall knocking her unconscious.

Tabitha warns, "Let’s get the hell out of here!" As the adults run through the corridors of a cavernous lair, they somehow end up in a magical courtroom. There is a jury of dark silhouettes, and a cloaked and hooded judge. A cackling Hecuba appears and announces that the good residents of Harmony must face the judge and stand trial for each of their crimes and secrets they’ve kept since they were rescued from the volcano in 2008. Hecuba’s voice turns into a roaring, deep and masculine bellow that is so strong it shakes the walls. Hecuba bursts into flames and explodes into bits.

Once the children find themselves free of the lair, they realize that none of the adults have escaped with them. They wonder how they ended up on the beach, and are devastated to discover that their escape was a trap for the adults. The children cannot locate or access the lair.

Back inside the magical courtroom, the cloaked and hooded judge comes alive and announces in the same voice that Hecuba used, "Each of you have secrets, lies and crimes that you must be held accountable. Today is your day of reckoning." As the judge begins to read off the lists of defendants, each of them begin to flashback to their respective secrets.

Theresa fears that it will be revealed that she has been stealing designs from a famous fashion house in California.

Paloma wants to keep it hidden that she is responsible for the financial downfall of Noah’s internet business.

Ethan thinks back to a suspicious conversation and meeting he had with Whitney in New Orleans. He remembers saying, "Whitney, there is no way we can keep this a secret much longer." Whitney responds, "We have to because it’s a matter of life and death."

Whitney also flashbacks to her secret meeting with Ethan but also prays that an even bigger secret doesn’t come to light. She grasps her stomach. Is she pregnant?

Eve remembers that she is being blackmailed to steal oxycondone and other drugs from the hospital which are being sold on the black market.

Julian fears that not only will his secret about his involvement in the pharmaceutical scandal be revealed, but the fact that has been keeping a more devastating secret could be discovered.

What other secrets are the residents of Harmony hiding?