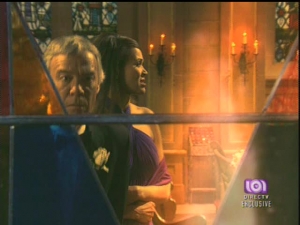 As everyone knows, this has been the final week for Passions, barring some surprise resurrection in the future. Unlike some of the characters on the series, I have little faith in such things and have been watching the show quickly move to its fated conclusion. Now everyone has seen the conclusion and has gotten the ending they wanted or didn’t want. Tonight, we can each say a little goodbye to all of our favorite characters. I know I’ll say goodbye to Tabitha and Endora, to Esme, to Vincent, Julian and Kay, to Sheridan, Luis and Beth, to Precious, Edna and Norma and once again to Alistair since he won’t be raised from the grave. I have watched since the beginning. Knowing that the end was coming, each day since the cancellation was announced has been a strange mixture of pleasure and sadness. Although the series never gained a substantial audience and was frequently trashed or ignored by critics and much of the general daytime audience, it’s always had a special place in my heart that no other show will ever fill. I can honestly say that no other television show has ever meant as much to me or given me as much delight.

From its first episode, when it caused a scandal by linking Sheridan to the recently dead Princess Di, its makers were bent on doing something television makers rarely do — genuinely challenging the audience. And not in a safe or high brow way, nor in the equally safe manner reserved to sketch comedy and satire. Instead, they embraced a strange grey zone half way between seriousness and ruthless mockery. They challenged the use of time, stretching out a few minutes of story time into a week at some points. They stretched the bounds of sexuality, the convolutions of plot and the complexity of philosophical and theological argument. As stupid as Passions often seemed superficially, when subjected to deeper analysis, it comes off as one of the most clever and subversive series on TV.

There’s always been something brave, or perhaps just loony, about the way it has consistently broken with all of the rules concerning good taste, good storytelling, good marketing and just about anything else. To a degree, Passions was an anti-soap opera. Most of the people I know who watched it, enjoyed it for two reasons. The first was because it was funny in a unique and rare way; sometimes acidly sardonic and at others disarmingly cute; the show’s cartoon cruelty appalled some and made others laugh hysterically. But another thing that attracted people to it was that it never did what soaps were supposed to do. It embraced all of the conventions and the most ridiculous aspects of the genre and delighted in mocking everything and turning it upside down. But the creative team rarely took the easy way out, sometimes stretching the most unbelievable or ridiculous things on for periods of time which aggravated much of the audience. While this was no doubt an unwise marketing decision, it displayed a degree of creative drive, self-discipline and chutzpah almost completely lacking in popular entertainment. Believe it or not, the hardest thing in writing a script isn’t telling the story, it’s not telling the story, and not telling a story for years at a time is a unique achievement in the annals of TV history.

Although the talented cast and crew deserve more credit than they're generally given, the real star of the show was always its Head Writer, Creator and Producer, James E. Reilly, perhaps one of the most controversial and divisive people to ever work in daytime. Sometimes praised, often reviled, Reilly worked on half of the major soaps, displaying a remarkable degree of diversity. He wrote for Ryan's Hope, Young and the Restless and General Hospital before becoming one of the Head Writers for Guiding Light. While there, he ushered it through the early 90's and some of the series' richest and most complex material, taking home two Emmys. When he arrived at Days of Our Lives in 1992, however, he suddenly went in a very different direction. For five years he introduced some of the most bizarre and shocking story lines on daytime, including live burials, satanic possession and some very peculiar Stefano related material. Although this move to the weird was panned, it was a giant ratings coup for a time and many shows followed suit. His plots gained soaps a broader audience and increased media attention. He even ended up as a character on the sitcom Friends.

He left amidst controversy in 1997 and went to work on Sunset Beach before creating Passions. His new series would encapsulate everything he had been working toward and give him the freedom to push the genre in a direction few would have dared to go. Filling Passions with the supernatural, the strange, and with pop culture parody, it became a cult hit, even if its rating remained low. All the same, NBC still brought him back to Days to fix it after it had taken a nose dive following his departure. Although he was eventually taken off of Days again, the show has significantly declined once again without him. Sticking with Passions, he continued to push the boundaries as far as they would go, mocking the sacred cows of the entertainment industry by trying to get an Emmy for an orangutan and seeming to enjoy his reputation as an enfant terrible. He parodied himself on the show when he created a corrupt and perverted judge with a name nearly identical to his and, in interviews, sometimes compared himself to Alistair Crane. With his magnum opus now drawing to a close, he's rumored to be retiring from the world of daytime and leaving behind a career as one of television's greatest punks.

Passions: Vote in the Third Annual...