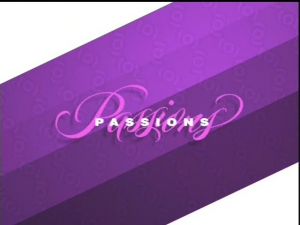 Just a quick programming note. It has been announced that Passions will be concluding its run on DirecTV on Thursday, August the 7th, 2008 rather than on August the 11th as previously reported. If you’re planning a Good-bye to Passions Party, it would be best to keep this in mind. You’ll also be happy to know that DirecTV’s The 101 Network will re-broadcast the final four episodes in a marathon on Friday, August the 8th.

Sounds like a great opportunity to whip up a batch of martimmys and maybe even a tomato soup cake to witness the wind down of the series to its fated conclusion.