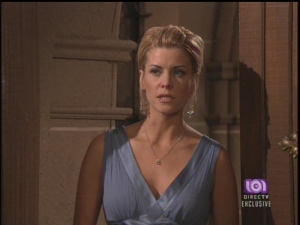 Passions‘ wonderfully talented McKenzie Westmore (Sheridan Crane) has just completed shooting a role on the hit Showtime series Dexter. The darkly comic series follows Dexter, a blood spatter expert for the Miami Police Department, who spends his off hours hunting down and murdering the guilty. Westmore will be playing the part of Natalie in an upcoming episode. On her website, she had this to say about it: “It was a really fun part! I cant go into any details because I don’t want to give the surprise away so you will just have to watch!” The date the episode is set to air has yet to be released, but we’ll update you when it is.

In other Sheridan related news, Kam Heskin, who once subbed in as the troubled heiress for several months and is best known for her role on internet soap Coastal Dreams, will also be returning. She will be resuming the role of Sheridan next week, though only for a few episodes. The actress was called in when Westmore took a few days off sick. McKenzie fans need not worry though, the actress quickly returned to work and finished off the series. To read more about Heskin and the other Sheridans, please see our article.