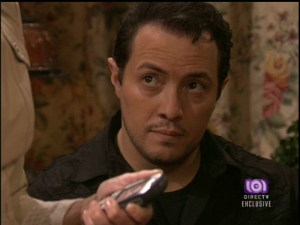 As Juanita gets closer to harmony and her ultimate goal of wiping Pilar and her children off the globe, she also spends a lot more time talking to her henchman. Although it’s generally a one-sided conversation, dominated by Juanita’s murder fantasies and outraged rants, her unlucky henchman adds to his mumbled responses with frequent voiceover thoughts on just how crazy he thinks his boss really is. In the longstanding Passions tradition of not naming the lower ranking actors of evil deeds, this character, like many of the Crane assassins before him, doesn’t have a name.

He is played, however, by an actor who may be familiar to some people in the audience. Hector Luis Bustamante has been playing Juanita’s anonymous henchman for a while now, though he rarely gets a word in edgewise. The actor is a familiar face on TV screens. He has appeared on Heroes and Las Vegas as well as The Shield, 24, King of Queens and had a recurring role on Crossing Jordan. The Colombian born actor also appeared in the Hollywood film Hostage and Sueño with John Leguizamo. He caught the acting bug early in life, but pursued a degree in design at the Parsons School of Design in New York. He worked as a graphic designer before launching into a full time acting career.

Bustamante has recently shot the role of Detective Hernandez in the film Jada, which just happens to co-star former Passions actor Siena Goines (Valerie). He is currently filming a starring role in a made for TV movie Little Girl Lost: The Delimar Vera Story. That film tells the true story of a woman who discovers that her daughter is actually living with another family after believing that she had died in fire years before. It is expected to air on Lifetime this August. Following that, he’ll be moving on to a very different project when he shows up in sci-fi thriller Silicon Valley.

Seth Meyers Drags Trump’s COVID-19 Downplay, Says President Is A “Deeply Disturbed Individual With No Regard For Human Life”