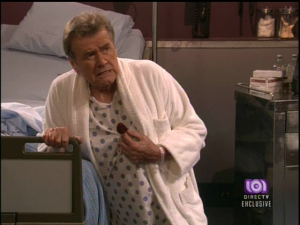 It finally happened. After years of people promising to kill Alistair Crane, the most evil man in Harmony, he finally died. The death was an appropriately ironic one; the man who always sought to purify his family, often through torturing and even killing his own children or grandchildren, fell at the hands of his own son. “I gave you life! It’s not fair that you should take mine,” were his last words.

Among the villains in soap opera history, Alistair will always stand out as one of the most evil. The only easily comparable master of mayhem has been Stefano DiMera, created by Pat Falken Smith before being largely re-imagined by Passions Head Writer John E. Reilly. While Stefano was recently written off of Days of Our Lives in a brutally dull manner hardly befitting his crimes or his personality, Alistair’s death has been more appropriate. After laughing at Eve when she tried to stab him, he strategically cowered for his life when she tried to shoot him, something he’s done on numerous occasions previously. When his son Julian stepped in to finish the deed, Alistair could only burst into laughter at the prospect of dying at his hands… before it was pointed out that he’d actually been shot. It took him awhile to admit that a bullet just went through his heart but, when it finally did register, he dropped dead. Appropriately enough, the man who once sought the position of Anti-Christ in a bid to take over the world, fell to the floor setting off an earthquake that threatens to destroy everything. As Tabitha says, this probably will spell the end of everything in Harmony. Everyone lived in fear from Alistair, now they get to die in fear without him. Is this the beginning of the Apocalypse, or is it something else?

Alistair was everything a soap villain can be but pushed to excess. Unlike most of the other baddies in Harmony, who were small time thugs and quirkier than average psychos, Alistair was a billionaire who seemed to own much of the world. His massive corporation hid an equally massive criminal network involved in espionage, spy work, pillaging and any crime imaginable. He surrounded himself with surveillance cameras, allowing him an almost omniscient view of the town’s residents only rivaled by Tabitha. Like her, he dabbled with the dark side, attempting to steal a holy chalice and take the powers of the Church for himself. He also dabbled in shape-shifting, becoming a lesbian woman named Charlie as well as a strange monk. One of the other things that really set the character apart was the fact that, for most of his time on the show, he had no face. Instead, the character was played by two actors, with Bill Dempsey providing his body, often seen holding a trademark cigar, and Alan Oppenheimer providing the voice from 1999 until 2004. This peculiar, largely symbolic choice, always added to his strangely inhuman quality. He was often equated with a diabolical brilliance, something some found hard to believe considering how often he was thwarted by the Harmony PD. When the man was finally revealed, face and all, in 2004, his plots became even more devious and perverse and his cruelty began to hit new heights for Daytime. He was then played by two impressive actors: First, by David Bailey for four months until his tragic drowning; then, by soap vet John Reilly who took the role from January of 2005 until now. Reilly’s work was a note perfect essay on every growl, grimace, diabolical laugh and violent insult possible in a villain’s repertoire.

With Alistair dead and the whole town sinking into Hell in a closet, we’re unlikely to see much in the way of a memorial for the malicious man, so here’s a brief look back on a few of his more obvious crimes: Abducted Rachel Barrett, holding her captive and raping her for years; raped the teenaged Liz Sanbourne; beat and raped his wife Katherine; attempted to kill Martin Fitzgerald; plotted to kill his daughter, Sheridan; changed Theresa’s medication and saved her from the death penalty; hid DNA tests proving that Julian had a son with Eve; abducted Sheridan, stole her baby, and tried to murder her; blackmailed Dr. Ackland to torture Sheridan; had Paloma Lopez-Fitzgerald kidnapped and nearly raped; attempted to have Katherine and Martin killed; kept Fox, Katherine, Gwen and a baby captive, torturing them; continually raped Theresa; abducted, tortured and brainwashed Vincent for years before sending him out to kill and rape many of Harmony’s residents.

Passions: What Ever Happened to Dr...