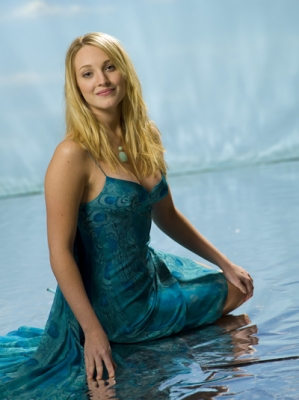 Summer is coming, which always reminds us of Passions specialty: Bizarre summer plots. It was only a few years ago, two years ago to be precise, that little witch Endora, under the corrupting influence of a certain animated film which shall remain nameless, conjured up a friend for herself in the form of sexually ravenous mermaid, and general troublemaker, Siren. The flippant mermaid proceeded to ruin Kay’s life, trying to steal both of her men from her with her enchanting looks and captivating song. By the fall, however, she had caused enough troubled and the witches put her where she couldn’t do anymore harm – in Endora’s aquarium. Of course, everyone’s problems got a lot worse after that, but that’s another story.

Broadway actress Brandi Burkhardt played the memorable mermaid and will soon be popping up on the big screen in a very different role. She has been cast in a small part in the hotly anticipated new Hollywood flick Confessions of a Shopaholic. The film is based on the best-selling novel by Sophie Kinsella which follows the story of a young journalist in New York City nourishing an addiction to shopping and her love for a rich entrepreneur. It stars the adorable Isla Fisher, Hugh Dancey, Joan Cusack and John Lithgow. Currently filming, the movie is expected to hit theaters nationwide by Valentine’s Day of next year.

Burkhardt arrived on Passions after several years on the pageant circuit, much like fellow actress and one-time Miss America, Kelli McCarty (Beth Wallace). She was Miss Maryland Teen USA in 1997 and Miss New York in 1999. The competitions also served to show off her singing talents, eventually landing her work on Broadway, most notably in Jekyll & Hyde – Resurrection. Since leaving the loopy land of Harmony behind, she has been very busy on stages around the country. She also reunited with fellow Passions cast member Eric Martsolf (Ethan Winthrop) for a production of the musical Li’L Abner (see our article) as well as appearing in an episode of Boston Legal.

Passions: What Ever Happened to Dr...