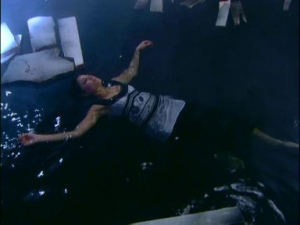 Passions fans have been shocked to see that troubled and troublesome Theresa Lopez-Fitzgerald Crane has, apparently, gone to sleep with the fishes, or the sharks at least. Following Kay’s premonition that death was coming to someone from Harmony, could it really be that she is gone? And, if she really is gone, this opens up all sorts of questions like: Will a grieving Ethan turn to Gwen, will this drive Pilar to the dark side and will this only be the beginning of Juanita’s revenge?

Of course, this isn’t the first time that the raven haired beauty has, apparently, ended up in the land of the non-living. Long time viewers will remember that she’s been dead before. Unlike her brother Luis, who was only held in captivity while his dead doppelganger floated through the streets of Harmony, Theresa was actually dead. That didn’t stop the action for her though. Ethan had just dumped her after discovering that Julian had gotten her pregnant (which turned out to be wrong) and, heartbroken, she promptly committed suicide by jumping into Harmony harbor.

Since the universe of Passions is governed by the laws of a somewhat esoteric Catholic theology, Theresa quickly went all the way down to Hell, always a popular destination for the townspeople. While there, she met Zombie Charity, disguised as Julian, and made a pact with the dark side. She was returned to life and a chance with Ethan in exchange for carrying out various evil deeds. The exact nature of her alliance with the forces of evil has never been fully clarified to the satisfaction of many Gwen fans, but the official Dear Tabby column states that: "Once Zombie Charity was destroyed the pact wasn't in force anymore." This is perhaps why the born again Theresa has had even worse luck than she had in her previous life.

In the coming weeks, we'll get to see the people of Harmony mourn the passing of its most fanatical believer in fate, but has Theresa really shuffled off the mortal coil once again? Will she be rescued by mermaids, demon elves or various spirits, good or evil? Will she come back as a zombie and drag the entire town into Hell after eating Gwen's brain (Ethan's wouldn't make a meal)? Only time will tell.

Passions: The Other Theresa