Passions: The Other Theresa 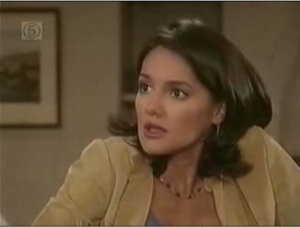 While Theresa seems to be swimming with the fishes this week, we thought it would be a good time to see what the other Theresa was up to. For those who don’t recall, or perhaps didn’t notice, the role of Theresa Lopez-Fitzgerald Crane has actually been played by an actress other than the inimitable Lindsay Hartley.

Viewers may recall when Lindsay left the show on maternity leave and Priscilla Garita took over the role for more than a month in 2004. Garita was already an established soap actress, having appeared on Another World and All My Children, but she really made her mark playing Gabi Martinez on NBC’s cult hit Sunset Beach. When she arrived on the set of Passions, she was shocked to discover that several people she had worked with on Sunset Beach were there as well. Leigh Taylor-Young (Katherine Crane) and Kathleen Noone (Edna Wallace) had both co-starred with her on the canceled soap. In an even stranger coincidence, or perhaps not a coincidence at all, fellow Beach star Nick Stabile was simultaneously cast as the replacement for Justin Hartley’s Fox Crane while he was off with Lindsay.

Since leaving her time on Passions behind, Garita has starred in Anthony Ng’s comedy 212 and appeared on Charmed. She recently completed roles in two feature films set for release this year. The New York born actress plays Miriam Norris in the sci-fi film InAlienable starring Courtney Peldon and Marina Sirtis. You will also be able to catch her playing a reporter in crime drama The Fall.

Meanwhile, Leigh Taylor-Young was rather abruptly written off Passions in 2006. Since then, the Emmy winning actress has gone on to play a psychiatrist in the film Spiritual Warriors starring Sally Kirkland and Robert Easton. That film is set to be released this year. Since Nick Stabile left the show and has successfully gone on to appearances on CSI:Miami and major roles on Saints & Sinners and the films Dead Write and Sheltered. Noone continues to sporadically return to Passions in the role of Edna.