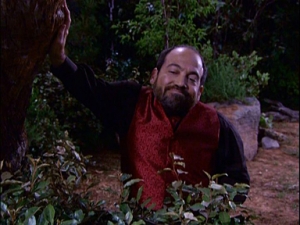 What? The Demon Elf? Yes, that’s right, I said the Demon Elf. For those of you who don’t remember, the Demon Elf was a malevolent creature conjured up by neophyte witch Kay Bennett to help her find her troubled sister… and maybe sort out her love life if he had some extra time. Although he wasn’t a great deal of help, he did manage to escort Kay and Tabitha to the site where Spike had buried his pregnant-hooker-wife alive. Most of the time, however, he just sat around Tabitha’s kitchen trying to come up with as many insults as inhumanly possible while winking lewdly at Kay. Then he disappeared without any explanation, leaving some people relieved and others scratching their heads.

Now the trouble-making imp will be returning for a visit to Harmony. What brings him back this time? Revenge perhaps? If that’s what he wants, he couldn’t come at a better time. Now that Kay and Tabitha have sworn off witchcraft, how can they possibly defend themselves against the forces of darkness?

He’ll be played once again by the incomparable Danny Woodburn. Since his appearance on Passions last year, the actor has appeared in three films. Among these was last year’s dark comedy Redrum and the horror film Pearblossom. He is currently involved in the highly anticipated film The Watchmen which chronicles the mysterious death of a superhero. He’s probably best known for his role as Mickey Abbott on Seinfeld but has appeared in roles on more than a dozen television shows and films.

He’ll be torturing Kay and Tabitha beginning next Monday, February the 11th.

Passions to Continue in Canada:...