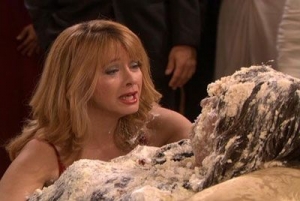 Timmy and his Martimmy (Soaps.com)

Two things happened that made me write this article. The first was that I recently realized that Tabitha and Endora never actually make their own food, let alone shop for it. Apparently I wasn’t the only person never to notice this because several people have pointed it out to me. This got me thinking about food on the show and, perhaps coincidentally, posters on the board have been talking about it too.

There have actually been quite a few important food related events on the show, although they are generally of a macabre nature. I don’t think I’ll ever look at a wedding cake the same way again after a dead JT Cornell was dug out of one in a pair of bra and panties. Nor will soup taste quite the same since Siren the mermaid made her sex potion soup from…um I don’t have a euphemism for it, but it certainly drove Sam and Rebecca wild when they accidentally ate it. Then there was the guacamole Theresa made to poison Alistair (which Ethan ate and almost killed him), the Mexican meal that Pilar cooked with her children for Luis while he was on death row and the giant wild turkeys which Endora conjured up on Thanksgiving.

More specifically, there are a series of recipes which were actually created especially for the show and made famous by its characters. The Martimmy, created by the doll who turned into a little boy, are still enjoyed by Tabitha, although no one else seems to be able to drink them without becoming insanely drunk (even Julian). And who can forget that Grace Bennett was famous for her tomato soup cake, which was actually a real dish that has existed for several generations in America. Apparently the doomed poetess Sylvia Plath was a huge fan of tomato soup cake, and often made them in fits of depression. It’s not quite as appalling as it sounds. It’s really just a cheap and slightly eccentric spice cake, not nearly as eccentric as other local desserts such as vinegar pie.

Now, if you’ve never actually tried these recipes, you are probably a saner person than I am. If you are feeling adventurous, however, you can give them a shot. I do not encourage you to drink your Martimmy, or Martimi, depending on how cosmopolitan you feel about it, before eating tomato cake. You may wish to do so afterwards to erase the taste or the memory of it. These recipes come from an official press release the show put out a few years ago. You can find variations around the web and invent some of your own to suit your taste.

Grease and flour two 8-inch cake pans. Pour dry ingredients into a large mixing bowl. Add soup and butter to mix, beating them at low speed for approximately two minutes. Add eggs and milk. Beat mixture until well blended, being sure to scrape the sides of the bowl as needed. Pour into pans and bake 35-40 minutes. Let stand in pans 10 minutes then turn out onto rack to cool.

Of course, Tabby isn't much of a bartender and usually has her mystical minions on the dark side throw together a lovely batch of Martimmys. You can drink all of that yourself, but it's supposed to be for a dozen people. I'm sure that the dark side injects it with a little more than the spirits available at the local booze shop. Anyone below drinking age should now avert their gaze.

1 1/2 ounces rum or tequila has been recommended as the alcohol amount to be added. Although it's slightly sacrilegious, I actually use vodka, and usually a lot more than 1 ½ ounces of it, except for one time when I used another drink which I shall not name. Anyway, have fun!

Passions' Andrea Evans is Writing a...