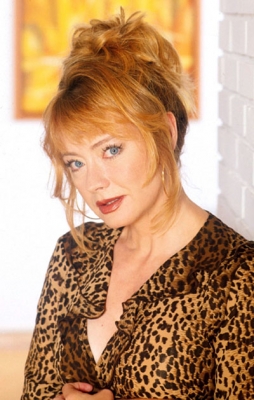 Even if you happen to hate Rebecca Hotchkiss, the hard drinking, donkey loving mistress of evil in all of its varied and most enjoyable forms, it would be hard to deny what a joy it is to watch Andrea Evans portray her. Although she’s been busy bringing her bubbly acid queen to the television screen of loyal Passions fans for years, she has also found the time to dedicate herself to a passion of her own— women’s health and healthy living. She has done this as the Celebrity Ambassador for the City of Hope’s Walk for Hope to Cure Breast Cancer and as a regular columnist for Healthy Cooking magazine. Now she is calling out to her fans around the globe to help her out with a new project— a vegetarian cookbook. This will be her first venture into the world of authoring an entire cookbook, vegetarian or otherwise. If you happen to be a vegetarian, enjoy vegetarian food or know an appropriate recipe, be sure to send it over to her at this address: AndreaEvansFanMail@yahoo.com
or by visiting her new blog andreanaturalway.blogspot.com/

The wonderful Ms. Evans has had a long history in soaps. She played Tina Lord Roberts on One Life to Live between 1978 and 1990, earning a Daytime Emmy in her time there. During a hiatus from that show, she appeared on The Young and the Restless as one of the many wives of Jack Abbott. She left television for most of the nineties, returning around the end of the decade to play Tawny, mother of troubled blonde temptress Amber Moore on The Bold and the Beautiful. She arrived in Harmony, taking over the role of Rebecca in 2000, following the departure of Maureen McCormick, best known as Marcia Brady from the original The Brady Bunch TV series. Ever since then, Ms. Evans has been a staple of the show, imbuing it with cheerful malice and trashy glee. She's tended to stay on recurring status to find time for all of the other things in life, like her friends, family and charity work.