Colton Shires and His Mom Lisa Chat with Soaps.com 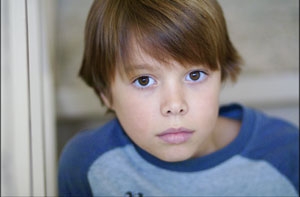 Colton with his mom Lisa

With all the recent headlines lately about young Hollywood spiraling out of control, it’s refreshing to talk with a child actor who doesn’t seem to be headed for disaster. After recently speaking with Colton Shires, who plays Little Ethan on Passions, and his mother Lisa, I was struck by how level headed and down to earth they both seemed about being in the business.

As Texas natives, the Shires moved to California after Colton was bitten by the acting bug at the ripe old age of five. After watching his older brother perform, Colton decided he wanted to try his hand at acting as well. As he explained, “When my brother started I kinda thought, ‘You know, he’s having a lot of fun and it kinda looks like fun to me.'” So Lisa put him in an acting class, he got an agent and booked a bunch of print jobs. Colton and his family then came to California to participate in a workshop focusing on pilot season and getting an agent.

Lisa recalled, “We thought, ‘Oh, you know we’ll try it. We’ll go out there as a vacation and you know take two or three weeks and have a good time.’ So that was five years ago!” All three of her boys landed agents and the following January, the Shires came back to L.A. for pilot season and never looked back.

“If someone had told me five years ago that I would be doing this, I would have told them they were crazy, but here I am still doing it. Of course, I think I am crazy,” Lisa laughed.

With her two oldest sons booking jobs in indie films, PSAs and commercials and Colton appearing in primetime, films and of course Passions, Lisa has been around long enough to know how she wants to see her children grow up in the business. As she told me, “I really try hard to keep them very grounded. [Colton’s] been home schooled in the past and we actually put him in a school this year and my first words to him were, ‘Nobody needs to know what you do. No bragging. No showing off. No nothing.’ He’s good about that; he’s like ‘I know, I know.'”

Having played Little Ethan since 2004 and with the cancellation of Passions on DirecTV looming, Colton let me know, “I’ll definitely miss the whole cast and the show and everything.” And while he’s “kinda sad,” Colton reflected, “[Passions has] really helped me out. I think it’ll help me for bigger and better jobs.” His mother echoed this sentiment stating, “It’s almost bittersweet. I mean you think other doors will open now because sometimes we turn things down because he’s working on Passions.”

And other times, as a concerned parent, Lisa passes on jobs for Colton for other reasons. "We have actually turned a couple of things down. I'm pretty open with the material he does, as long as he feels comfortable with it. We have on a couple, and not many, maybe two or three incidences where reading the script I was like, 'I do not want to have to explain this to him! It's so far above anything he needs to know about right now,'" she laughed.

Even though Passions can cross the line from time to time, Lisa has never worried about the material affecting her son, as she explained, "Everything on his end has been great. It's been a really good experience for him." Which also extends to the people he spends most of his time on set with, including, "Eric (Martsolf, Ethan) and Lindsay (Hartley, Theresa), they're really great for him to work with. And Eva (Tamargo, Pilar) she's been great. They spend time talking to him and playing with him and things like that on set. He's formed some really good bonds there and even some of the crewmembers. They're great with him. They give him little gifts, props that they've used that they don't need. They're like 'Here Colton take this home!'"

Working steadily on Passions, going to auditions and booking jobs in between doesn't leave room for a lot of extra time, but that doesn't mean his education suffers. Attending an accommodating school definitely helps out, as when they know Colton will be absent, his teachers give him homework to complete with his on set teacher and while waiting for auditions. According to Lisa, "As long as we bring the report card in, they count it as an excused absence."

One absence they can already plan for is the week Colton goes on the Farewell to Harmony Fan Cruise in April. His first cruise, Colton is looking forward to the trip and previewed, "I know they're gonna have like me and a couple of the cast members, we're gonna be talking and giving out autographs and they're gonna do like a trivia. A couple of us will be like some hosts. A lot of stuff actually I think. It will definitely be fun."

Lisa of course will be chaperoning her son, who will be in good company, as Colton's on screen father (Eric Martsolf), grandmother (Eva Tamargo) and aunt (Emily Harper) will be attending the cruise as well.

As for the future, Colton will soon be appearing in the film Southern Baptist Sissies which is slated for a 2009 release. Colton filled me in on his role, saying, "I play the younger role of one of the main characters and it's actually kind of funny because I'm hanging out with a bunch of other kids and we're all kind of like, gay, so it's actually kind of funny. It's when they're first discovering that they're kind of like that."

Hoping to take on future roles in action and comedy movies, Colton enjoyed his experience in this dramedy quipping, "I thought it was actually pretty fun to play. Luckily I didn't have to smooch any boys."

It was such a pleasure to speak with Lisa and Colton Shires. I'd like to thank them for talking with me and wish Colton a very long and successful acting career.

Passions' Martsolf to Star in L'il...

Passions' Andrea Evans is Writing a...