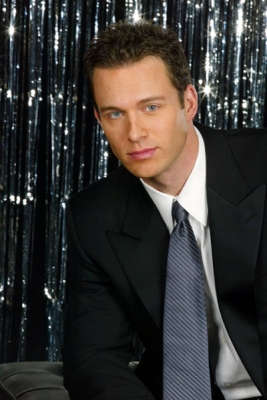 The year is looking bright for fans of Passions‘ Eric Martsolf (Ethan Winthrop). Not only did last year go out with him returning to his roots in musical theater for a production of Jingle Bell Rock, he also agreed to headline the Passions Cruise. Now he has a new venture to show off both his singing and acting skills. He will be taking on the title role in a revival of the classic 1956 musical L’il Abner.

Based on the satirical cartoons of Al Capp, with music by Johnny Mercer and a book by Norman Panama and Melvin Frank, L’il Abner tells the story of Dogpatch, the “most unnecessary town” in America. In fact, it’s so unnecessary, it’s about to be turned into a nuclear testing site. While the town’s array of outrageous characters bumble around for a way out, they also discover that the local baby tonic has the startling effect of making men masculine and handsome, but terribly turned off by sex.

Mr. Martsolf, of course, has had a respected career in musical theater for years, touring the country in a production of Joseph and The Amazing Technicolor Dreamcoat. He's appeared in more than forty musicals and plays, including premiering new works like Knight Life and Happy Days. Last year, he also released his first solo CD.

There's another Passions link in this production as well. Appearing on stage with Eric will be Brandi Burkhardt in the role of Daisy Mae. You may remember her as Siren, the vixenish mermaid who made Kay's life a misery while she tried to seduce both Fox and Miguel with her enchanting voice. Unfortunately, we haven't heard anything from her since Tabitha and Endora shrunk her down to the size of a sea monkey and dropped her in the kitchen fish bowl. Since departing from the show, Burkhardt got married to composer/ lyricist Frank Wildhorn, appeared on an episode of Boston Legal and in a production of the Broadway musical Jekyll & Hyde.

Appearing on stage with them will be veteran performers Cathy Rigby and Fred Willard. The production will be directed by Michael Michetti, with Lee Martino providing the choreography and Darryl Archibald giving musical direction. Performances will take place in the Freud Playhouse at UCLA from February 5th to the 17th. Tickets for this Reprise! production are available by calling (310) 825-2101. For more information, please visit the show's official site here.

Soaps.com Goes to Mercy Park with...