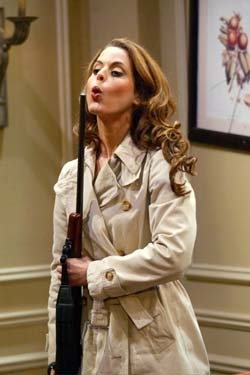 Often times soap fans feel like they know the people they see on TV everyday, but as we all know, those people are fictional characters. However, the individuals portraying those characters are real and usually have vastly different lives. Such is the case with Erin Cardillo who has played Esme Vanderheusen since 2005.

On Passions, Erin plays an outrageous, man obsessed, boozehound. In real life, Ms. Cardillo is intelligent, grounded and recently put on a reading of her first play, Mercy Park. I had the opportunity to attend this reading at The Blank Theatre in Los Angeles and later talked with Erin about her work as a writer and as Harmony’s favorite socialite.

When a playwright puts up a reading of their work, it’s just that – the cast acts out the story with script in hand. It’s sort of an early rehearsal with an audience. For Erin, it was a chance to see her work in action and “gauge what needed to be worked on.” Therefore, Erin didn’t cast herself, but several of her close friends and acting classmates who, “were really wonderful and gave it one hundred percent.”

Erin’s play revolves around a young couple, Rose and Avery who come from different worlds, but make a deep connection in Mercy Park, which Avery’s family owns. As Avery becomes terminally ill, Rose at first uses denial as a coping mechanism, but must eventually face losing the love of her life when he gives her instructions regarding what to do with his ashes.

After seeing her words come to life, Erin shared, “I felt really great about it. It was a really great learning experience and I’m looking forward to doing a rewrite of it very soon.” Although it involves serious subject matter, Mercy Park has many lighthearted moments, but Erin mused, “I think I just want to sort of bump up the drama a bit. It has sort of a lyrical quality to it, which I like, but I think I want it to feel a bit more…some of the themes could be a bit more dynamic.”

Not a fiction writer myself, I wondered where Erin got the idea for Mercy Park. "I don't know really. It was sort of floating around in my head. I had this thought of somebody's ashes and what that meant, where you would put them, or how, or something like that and it kind of grew from there," she explained.

After receiving positive feedback from her peers who attended the reading, Erin is excited to get started on tweaking her story so the project can move forward. "I really want to get a full production of it mounted, so I'm gonna start sending it out to theatres and we'll see what happens," she told me.

Aside from Mercy Park, this former performance studies major has other writing projects in the works as well. With a screenplay called XOXO, (which is "sort of like Singles for the MySpace generation") in the works and a pilot called Grimm Street (a modern adaptation of Grimm's Fairy Tales) in development limbo due to the writer's strike, Erin has plenty to keep herself busy when Passions comes to an end.

But even though she has a lot going on outside of Passions, ending her run as Esme Vanderheusen produces mixed feelings for the actress. "It would have been nice to be on DirecTV a bit longer. We all were enjoying the year and felt like we were gonna have a bit more time with it, but I don't know. I'm just sort of, you know I love playing Esme and sort of wish the show would continue, but I'll just move on to other things," Erin sighed.

With the series set to wrap on DirecTV this summer, I asked if Erin knew what was in store for her very colorful character. Unfortunately, she doesn't know anymore than we all do, but she did share what she'd personally like to she happen with her crazy alter ego. "I think I'd like for all of her boyfriends to stop being killed! That would be nice. If they could catch the killer that would be good. They just revealed that the killer is my niece Viki, so I think it would be interesting to see how that storyline wraps up, if she's gonna get caught and go to jail. And if she does, maybe Esme can find love," she laughed.

A girl can dream!

I'd like to thank Erin for inviting me to her reading of Mercy Park and wish her success in all of her writing and acting ventures.

Passions: Where Are They Now?...

Passions' Martsolf to Star in L'il...