Passions: Where Are They Now? Jossara Jinero 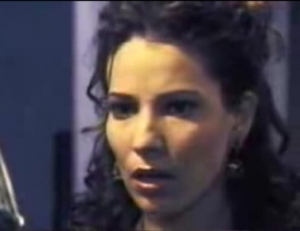 When the worldly and sensuous Rae Thomas hooked up with the naive Simone Russell, she didn’t expect much more than a fling. She didn’t even want more than that. But the young woman that she fell in with did want more and drew her into a passionate love affair. This caused all sorts of problem for Simone, momentarily alienating her from her family and friends. That relationship got quite a bit of notice, notably from the gay and lesbian press, and it led to Passions receiving a GLAAD media award for it. It wasn’t to last though and Rae was shockingly murdered by Vincent, Simone’s half-brother/sister during his lengthy reign of terror.

The woman who played Rae, Jossara Jinero, wasn’t new to TV when she landed on Passions. She had appeared on Without a Trace, Judging Amy and ER before winding up with a small role on The Young and the Restless. While still playing the owner of Harmony’s greatest lesbian bar, the actress appeared in Oliver Stone’s World Trade Center and on the TV thriller, The Closer. Since the time of Rae’s unfortunate demise, however, the actress who played her has gone on to other things, quite a few of them in fact. She has appeared in six films, mostly based in the rapidly growing Latino film community around LA. This has included roles in the short film Habanero and the heist flick Ladrón que roba a ladrón. Larger roles have come to her in the horror genre, however. She appears as Meena Garcia in the film Dreamslashers, released last year and currently available on DVD. To view a trailer for it, check out their website here. In sharp contrast to these titles, she also appears in the comedy The Journey which follows a slacker video game player who, dumped by his girlfriends, stumbles through a series of romantic misadventures which finally force him to come to terms with his Latino heritage. She also appears in Sky Kids, a thriller following the exploits of two kids who hitch a ride on a plane that just happens to be owned by the mob. That film is set to be released in theaters next month. Audiences will also be able to see her in a major role later this year. She recently wrapped shooting on GB: 2525, a hybrid of the sci-fi and gang film genres. She plays the part of Yoli.

Jinero has led quite a dramatic life herself. Born in Brazil to a pair of Maoists, she moved to Colombia and became a salsa dancer at the age of five and was acting on stage by the time she was eight. A few years later, the family sought refuge in the United States after her step-father was kidnapped. At the age of sixteen she left home and became a street dancer and entertainer at the Old Indiana Fun Park before going to school to get her BFA in musical theater. Since then, she has been working steadily and continues to expand her horizons. Beyond her work in front of the camera, she has also taken to directing short films lately and become involved in producing. Currently, she has produced a pilot with several colleagues which she hopes to get on television. If you’d like to see some of her short films, please check out her page at MySpace.

In addition to her work on stage and screen, she also spends time doing charity work. She served as the executive director for Hispanas Organized for Political Equality (HOPE) and also did work for The Children’s Institute, Upward Bound and SSG (Special Service for Groups).

Soaps.com Goes to Mercy Park with...