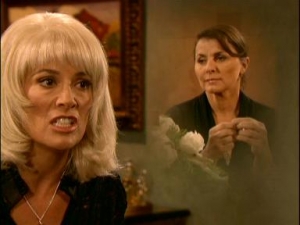 Last week, DirecTV publicly stated that they are planning to end their relationship with Passions this summer. This was deja-vu for a lot of the fans who heard a similar note from NBC around this time last year. While few people suspected that Passions would survive and be picked up, the show shocked many skeptics by slimming down and getting a new lease on life. The big question now is: Can it do it once again? While DirecTV has not categorically rejected the possibility of continuing with the show at the end of the summer, the network and fans have already geared up to weigh the other options. Now that the show has been streamlined and costs substantially less to produce than it once did, it may still prove a viable commodity to its owner, NBC. Although no official statements have been made to confirm it, there has already been media speculation that Oxygen (a network recently acquired by NBC ) may take on the show.

To add to the sense of deja-vu in this situation, fans of the show have already started to campaign to keep it alive through petitions and letter writing. It did work once before and it can work again. (Just check out our article on fan petitions here.) If you’re interested in adding your voice to the call to keep Passions alive, you may wish to visit a few of these links and let your voice be heard.

You may also sign an online petition to bring the show back to NBC here.

If you know of other Passions-saving initiatives, please feel free to send us information about them to add here. You can get in touch with us here.