Passions: The Return of Norma and Edna 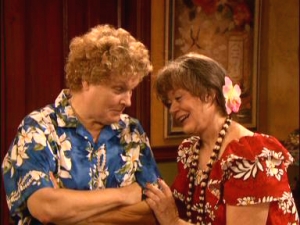 The Christmas season is upon us again and there is at least one thing you can always be sure about at that time of year: The return of Norma and Edna. The popular, ax wielding duo will be making their return to Harmony during the first week of December. But will things be different this time around? Last time we saw the sometime lovers, frequent mental hospital roommates and world famous cabaret stars they were actually getting along quite while with their old arch enemy, Tabitha. Will they come back to stop Tabby’s current evil rampage or will they succeed in doing what they failed to do in the past: Taking out Santa Claus? Well, we won’t reveal it, but it’s a curious surprise.

The incomparable Marianne Muellerleile and Kathleen Noone will be returning to their roles as Norma and Edna, respectively. Muellerleile has been running a very busy schedule since her last appearance on the show. She has filmed a role for a film to be released early in the new year and appeared in the recurring role of Sister Dominick on The Suite Life of Zack and Cody. Fans of her work can also catch her in recent DVD releases Norbit, Smoking Aces, Thank You For Smoking and Welcome to Paradise. Passions fans will also be happy to hear that she has a small role, along with co-star Erin Cardillo (Esme), in the upcoming movie The Hottie and the Nottie. For her part Noone has been gallivanting around Europe but has returned to the entertainment world once again. She recently completed a role in the Adam Sandler film, You Don't Mess With Zohan which she described as 'delightful'.

The demented duo make their return on December the 6th.