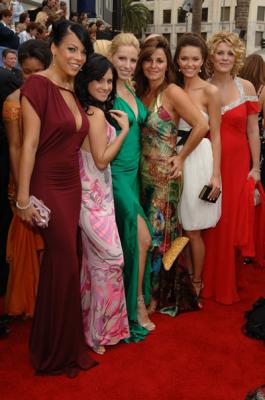 Eric Martsolf and Liza Huber, at the Emmys! (NBC)

Passions fans need not worry about their favorite show being dropped! Growing concerns regarding contract status had left fans frightened for the future of the soap; however, NBC has renewed the supernatural soap, Passions, for another year!
Sources say that NBC signed the contracts with the stipulation that the daytime drama was to slice their budget considerably. The budget cuts resulting in almost two dozen behind-the-scenes staff members as well as a small number of cast members being laid off.

Filmed in Burbank California, USA, Passions started their run in 1999, taking the place of now defunct daytime series, Another World. This makes them the newest soap to be introduced into daytime drama. With their inventive storylines, and eccentric characters, they’ve since been nominated for 27 Emmy Awards, and have taken home 4 wins!

For seven years, Passions has been providing their fans with plenty of humorous storylines, boundless witchcraft, perpetual intrigue, and of course, unbridled Passion! Soaps.com wishes to congratulate the series on their seven year run and wish them many more years to come! Cheers to your 8th season!