And the New Miguel is 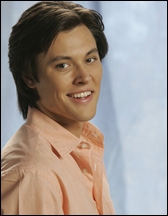 Well, finally after months of waiting, fans of Miguel Lopez-Fitzgerald can relax now that the role has been recast. The youngest of Harmony’s famously beautiful brothers will be returning from the dark side soon and he will be played by a face familiar to many soap fans. Twenty-four year old actor Blair Redford has been cast as the new Miguel. Many of you may recognize him as Scott ‘Scotty’ Grainger Jr., the son of perpetually stalked fashion vixen Lauren Fenmore on CBS’ Y&R. He played the role of the academic and aspiring writer who got mixed up with psychopath Sheila Carter from 2005 until 2006. Now he’ll be in Harmony getting mixed up with a whole new batch of eccentric and beautiful people to whom the residents of Genoa city don’t hold a candle. After leaving Y&R, he appeared in the film The Other Side as well as on TV show’s Cane and October Road. The athletic young actor also has two films coming out early next year, Goy and Dance of the Dead.

He is the fourth actor to take the part, following Adrian Bellani, Jaylen Moore and Jesse Metcalfe. His first air dates will be in December. Soaps.com sends congratulations to Blair and welcomes him to the cast!