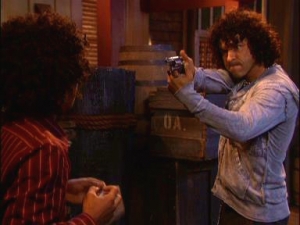 Now that Alistair has come back and Vincent is on the loose, Spike may not be the major villain in town but at least the man who plays him is keeping busy. The one and only Christopher Maleki, who plays the grim and ghoulish Herbert ‘Spike’ Lester is currently appearing on screens in the new film Futbaal: The Price of Dreams. It began showing in limited release last week at Laemmle’s Music Hall 3 in Beverly Hills, CA. and is expected to begin showing elsewhere soon.

Futbaal: The Price of Dreams follows the Iranian National soccer team as it tours the US. The narrative concentrates on the conflicts between two brothers: The younger, Babak, the star of the team, and his older, more conservative, brother. When Babak takes an offer to join an American team, he’s virtually disowned by his family. Left alone in America, he meets a beautiful Iranian woman and her mysterious and powerful brother, who may or may not have their best interests at heart. Maleki plays Dr.Shafian, the brother who could make or break the budding romance. Rounding out the cast is Sasha Maxime, Natalie Oman, Dan Metcalfe and Mekabiz Mohadjer in this film directed by Erik Laibe and written by I.J. Azimzadeh.

Maleki joined the cast of Passions in March of 2005 and has been the resident creep ever since, winning a slew of fans with his off-beat humor. Previous to joining the cast, he fellow Passions star Phillip Jeanmarie (Vincent) in Power Rangers: Wild Force and on the soap Port Charles. In addition to being a successful actor, Mr Maleki is also an established portrait photographer. To see his work, please visit his website here.

Passions:The Busy Career of a Former...

And the New Miguel is