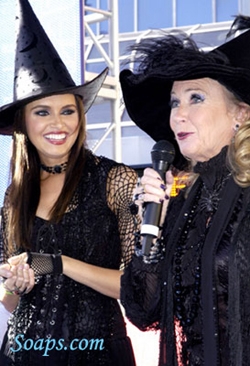 On Saturday October 20th, cast members and fans of Passions came out to Universal City Walk in Hollywood, CA to celebrate Harmony’s resident witch, Tabitha’s 300th birthday, as well as Passions’ move to DirecTV . Helping to set the tone, everyone dressed in traditional Halloween costumes in hopes of setting a Guinness World Record for the Largest Halloween Gathering.

Prior to participating in the record setting event, several of the actors walked the “orange” carpet where they showed off their elaborate costumes and where I had the opportunity to speak with Dracula, a couple witches and a “black Hugh Hefner.”

As the co-host of the event, Heidi Mueller (Kay), dressed as a witch, confidently told me that while she didn’t know what the existing Halloween Gathering record was, “We’re gonna beat it today.” Since one of the rules involved everyone standing in the same spot for fifteen minutes, aside from introducing the birthday girl, part of Heidi’s duties consisted of, “getting everybody together [so] we can stand in one place and have the countdown.”

While they were all there to promote their show being on DirecTV, the cast of Passions seemed thrilled to just be out having a good time. The dashing Eric Martsolf (Ethan) dressed as Dracula was happy to be there because, “It’s just the fact that all of our cast members are dressed up looking like weirdos. I mean I think that’s the real point here. It’s just something fun to celebrate Halloween.”

Phillip Jeanmarie (Vincent), dressed as the “black Hugh Hefner,” was there for a good time as well, “It’s great to just dress up and [the fans] can dress up and participate and we can meet the fans and just thank them for supporting us.”

As for Jeanmarie’s costume, he explained that dressing up for Halloween isn’t as easy as it used to be, stating,” As I’ve grown older I found that you have to be more creative. You gotta kinda create certain things, so it gets challenging every year.”

This year he tried to emulate the legendary Playboy mogul. “There’s only one Hef [but] I’m trying. I just need a couple Playboy Bunnies around and I’ll be all right, you know what I mean?” He laughed.

As for his character Vincent, who is no stranger to dressing up as someone else, Phillip told me the fans, “Either hate me or they love me. So you know the ones that hate me, I gotta remind them that it’s just acting, but other than that I feel the love.”

Another actor whose character likes to role play, Erin Cardillo (Esme) came dressed as a witch as well and let me know that Esme is in for an interesting ride with her latest fling, officer Jake. While you may already know that Jake is set to fall victim to Esme’s black widow syndrome, Erin assured me that, “First there will be many costumes and several funny things that happen.”

One thing (and hopefully the only thing) Erin has in common with her off-kilter character is that she enjoys dressing up. Filling me in on her previous year’s costume Erin recalled, “I was a Care Bear last year. I made my own costume and everything. I was Love-a-Lot and I had big furry ears and a glow in the dark stomach.”

Heidi Mueller is another huge fan of the holiday as she enthused, "I'm obsessed with Halloween. Halloween is my favorite time of the year. I LOVE Halloween. So this year, right now I'm a witch but when I go out for my own Halloween parties, I'm gonna go out as Wonder Woman."

As for Eric Martsolf, he's looking forward to enjoying the holiday as a new father. He filled me in on how his two-year-old twins are starting to get into the festivities, "They're just now getting it. They're looking around and seeing...I mean my wife has been decorating and you can tell they're interested so we got them costumes and we're gonna take them to the mall or something."

Another parent and "witch", Andrea Evans (Rebecca) expressed her new appreciation for the holiday now that she's a parent as well. As she told me, "I am a big Halloween fan especially now that I have a daughter. You know, when you have kids Halloween is a big to do." In fact she was preparing to bake Halloween cupcakes with her daughter later that night.

Concerning one of the reasons they were out in full force, Andrea shared that the show's transition to DirecTV has been "seamless." She expressed that, "We're happy to be with DirecTV . We love it and hopefully people will be here and celebrate Halloween with us."

Her on-screen former son-in-law, Martsolf is also happy with their new home, saying, "It's been great. DirecTV is totally enthusiastic about the show. I'm really impressed with the way in which [they have] embraced the whole genre. They think it's great; they think there's still a huge audience for it. They're looking to have us on for a long, long time."

As the event got underway and in hopes of upping their numbers, the organizers tired to encourage more participation from passersby by offering them ready to wear costumes and easing up on their rule of participants donning only traditional costumes. With their total reaching 105 participants, everyone, including the actors, stood in a roped off area and watched the clock click down.

During the official fifteen minute time period, the cast did an impromptu Q&A with the fans where Phillip Jeanmarie shared that Vincent was pregnant and didn't know who the father was! It wasn't clear if he was sharing a spoiler or just making it up in hopes of luring fans to DirecTV. Fans also told McKenzie Westmore that they wanted to see her character get together with Spike. An idea portrayer Christopher Maleki seemed pretty receptive to, leading Westmore to dub the couple "Spikidan."

After all the official duties were tended to, a group photo was taken and the cast stuck around to meet their fans and sign autographs. And while many Passions fans are upset the show has moved to DirecTV , I talked with a couple people whose devotion is unwavering.

Two such fans, Dave and Glenda came all the way from Las Vegas to participate in the event. As they told me, "We've been to everything they've done. We're huge Passions fans." As for the move to DirecTV , the couple had no problem changing cable companies because, "We love our Passions. We'll follow them."

Another fan, Nina from L.A, can't get the satellite service in her area, but she reads about it online everyday and is planning on getting the online subscription. Even though she can't watch it right now that doesn't deter her because she's a "Huge fan; that's why [I'm] here."

And Lyvette from Hollywood got DirecTV just for Passions, "I was willing to do it. I had no problem."

Love it or hate it, Passions is on DirecTV for the foreseeable future. While that may be a change you don't like, one thing that isn't going to change is the actors' love for their fans and their appreciation that the show continues to live on.

Passions:The Busy Career of a Former...