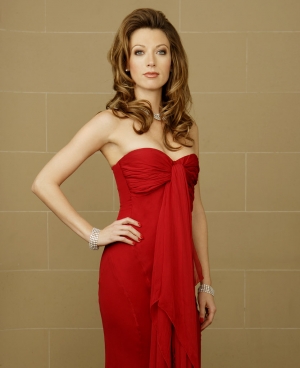 Former Gwen Hotchkiss, Natalie Zea, can currently be seen on ABC’s new critically acclaimed prime time soap Dirty Sexy Money. Airing on Wednesdays at 10:00 PM, the show concentrates on the descent into decadence of an idealistic lawyer as he’s brought into the all-consuming orbit of the ludicrously wealthy Darling family of New York. Zea plays the serially divorced middle daughter Karen Darling. The show also stars Peter Krause, Donald Sutherland and Jill Clayburgh. Zea played the part of Gwen from the time that Liza Huber left the show in 2000 until she returned in 2002. During that time she also met ex-Ethan Travis Schuldt (1999-2002) and they began an off screen relationship. The couple became engaged earlier this year. Since leaving the cast of Passions, she has appeared on The Sopranos, Friends, The Shield, 24, Eyes and Without a Trace.

People often wonder what happened to the character of Hank Bennett, but there’s never really been an answer. I can tell you what happened to the man who played him though. Ryan McPartlin played the part of trusty policeman from 2001 until 2004 before suddenly vanishing from Harmony. Subsequently, the actor has had a busy career, popping up on TV series What I Like About You, Pepper Dennis, The Shadow Effect and starring on the sitcom Living With Fran from 2005-2006. Now fans can see him back on NBC in this season’s widely publicized new series Chuck. The show follows the adventures of a computer geek who has the secrets of a rogue CIA agent embedded in his brain. McPartlin plays the recurring character Captain Awesome (no , really, that’s what they call him but you’ll have to watch the show to understand why). Chuck airs Mondays at 8:00 PM.

And if you're watching Chuck, you might as well stick around and watch Heroes since it's on right afterwards and, soon, another former Passions star will be making his way onto that show. Following in the footsteps that led the first Miguel Lopez-Fitzgerald (Jesse Metacalfe) to primetime, Miguel number two, Adrian Bellani, will be arriving in a world which may be even more far fetched than Passions, that of the extremely successful NBC epic Heroes. Mr Bellani is expected to appear on an upcoming episode (reportedly episode number 8 of the new season). When he appears, we've heard that he'll be speaking only in Spanish and while the part may be brief, it's a great sign of things to come.

Soaps.com would like to congratulate all of the actors on their new successes and wish them all the best!