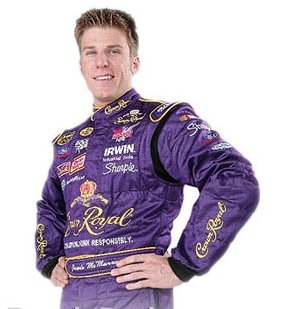 Passions will be getting a surprising guest star next week when renowned NASCAR driver Jamie McMurray drops in. The script for the episode called for ‘a real NASCAR driver’ and, well, they really got one. McMurray recently won the Pepsi 400 in a photo finish finale that was the closest in their history. On his way to another racing event, the thirty-one year old Joplin, Missouri native dropped by the show’s set at Studio City in California to shoot his part. Although he only has a few lines, the daredevil athlete admitted to reporters that he was still nervous on the set. Everyone in the cast and crew made him comfortable though, as they’re so famous for doing. He even stated in a recent interview that ‘…the best part about the shoot was how nice the people were on the set. It was pretty cool to be able to go behind the scenes and see how it was shot. It’s amazing to think they shoot five days a week, and sometimes for up to 15 hours in one day.’

This is not his first appearance in a work of fiction, however. McMurray previously appeared in an episode of The West Wing and the Will Ferrel vehicle Talladega Nights: The Ballad of Ricky Bobby. What could possibly prompt this appearance in the strange world of Harmony? You’ll have to tune in on Wednesday, September the 26th to find out.