Blair goes to Spencer for the truth, Natalie and Michael come face to face with John and Todd goes to Vicki for support before putting together a mysterious plan...

John looks to Natalie, tells her it's nice to see her, to hear her say his name. She apologizes for not knowing he was alive. John says she couldn't have known. When Natalie gets up to get the doctor, John asks her to stay, says he needs her, that he has something to say. Before John can further the conversation, Michael comes in and Natalie gives the brothers some time alone

At the police station, Adriana asks why Rex needs to talk to Spencer. Rex says that if Spencer knows that Tommy is Todd's son, Rex will have no choice but to tell Michael and Marcie. When Rex asks where Bo is, he's told that Bo is delivering the news to Spencer that John McBain is alive.

In his cell, Spencer thinks back on his trial. Bo shows up, tells Spencer that there's something he needs to tell him. As Spencer rants, he says that it's too bad he'll never get to see the look on John McBain's face when the not guilty verdict comes back. However, Bo says, "Maybe you will John McBain is alive." Bo goes on to say that John was misidentified and that Hugh is the one who's buried in John's grave. Spencer flips out, screams that Bo is lying to him, refuses to believe that Hugh is gone! Bo tells Spencer he's lost a son, that he would never lie about something like this. Bo leaves, and Spencer is flooded with tears.

At the country club, Cris and Evangeline practice their golf swing while Evangeline worries about the verdict. Trying to take her mind off the trial, Cris asks Evangeline to help with his golf stance.

Cris gets a call. Natalie tells him that John is alive! He hangs up, goes to Evangeline and delivers the wonderful news Cris takes her in his arms. When Cris suggests they go to the hospital, Evangeline says she doesn't want to intrude on Natalie's reunion with John.

Natalie rejoins Michael and John. When John asks about Hugh, Michael and Natalie tell him that Hugh died. Before they fill him in on all that has happened since the accident, Michael asks John what he remembers. John goes on tell them about the accident, says the last thing he remembers is talking to their dad. John asks about Spencer, and Michael assures him that Evangeline is giving Spencer everything he deserves.

Kelly arrives at the penthouse to take Blair to the hospital. Although Blair told Todd she was going to the doctor's today, Blair tells Kelly that she changed her appointment, that today Kelly is going to help her find Todd's son. Kelly protests, says that Blair needs to be seen by a doctor today! With a bit of persuasion, Blair convinces Kelly to help her, to go to Spencer and ask about Todd's baby.

Todd arrives at his office to find Vicki behind the desk. Vicki calls Todd over to his computer, shows him her article that John is alive! Although Todd is happy, in a Todd sort of way, he makes a crack at Vicki's headline. They laugh about it, then Todd gets serious, tells Vicki that Marty Saybrooke's son tried to rape Starr! Todd gives Vicki the details, suggests that Marty was behind the whole thing. Vicki defends Marty, says that she would never do something so awful. Todd blames himself, says that Starr is suffering because of his past. However, Todd says he's going to fix this mess, that he has a plan. 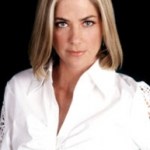 Kelly and Blair show up at Spencer's cell. Kelly hands him pictures of the baby, and Spencer gets teary-eyed, says he's happy for her. Kelly lays the gratitude on thick, tells Spencer that it's because of him that she was able to have her baby. Blair comes forward, asks if that part of Spencer still exists. When he claims it does, Blair says to prove it, to tell her where Todd's baby is! In the hallway, Rex listens Spencer tells them that his son is dead, that they have a lot of nerve coming down there asking where Todd's kid is! Spencer tells Blair to give Todd a message, that if he can't have his son, then neither can Todd. When Kelly and Blair leave, Spencer breaks down

Kelly and Blair put the pieces together and realize that Hugh died...

Rex goes back upstairs, tells Adriana that he got his answer.

When Michael leaves, John opens up to Natalie, tells her that before the accident he wanted to tell her "I love you," John says. Natalie is overwhelmed with love

Next on One Life to Live: John remembers his pre-accident intentions regarding Natalie, Spencer's trial takes a surprising turn, Rex is haunted by a disturbing nightmare and Jessica and Antonio end their honeymoon early...

A Long Road To Recovery