Everyone worries whether Jessica will show up for her wedding, Nash makes one last plea to Jessica and Vincent screams that Hugh's eyes are brown as he looks into the eyes of the man beneath the bandages... 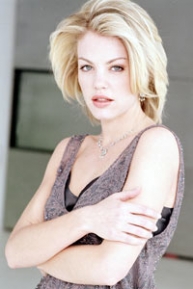 At the church, everyone waits for Jessica and Antonio's big event. Evangeline goes to Todd where he comments on hating weddings. They take a seat together. Bo and Paige start to get close until Rex comes up, asking if they've seen Jessica or Natalie. Natalie comes in the church with Roxy, but Jessica still hasn't arrived. Her bride's maids start to worry. Natalie goes off by herself, holding John's St. Jude metal, thinking about John. Bo comes to her side, tries to comfort her.

Jessica asks Nash what he's doing at the house, and he blurts out, "Don't marry Antonio!" Nash says she looks beautiful, that she looks exactly like Tess. He questions why Jessica isn't at the church yet, and she says she was on her way before Nash came in. Jessica tells Nash that she's sorry he's hurting. Nash makes Jessica face a truth, a truth that since her integration she's a "new" person, one who is not following her heart where Nash is concerned. Jessica professes that she's marrying the man of her dreams today, asks Nash to not show up at the wedding. Nash says Antonio doesn't love the Tess part of her, that he knows Jessica needs more than what Antonio can give her. Nash says her marriage to Antonio is doomed to fail. Nash walks mere inches from Jessica, asks her to please think about what she's doing. When she tries to leave, Nash says he can't promise her that he won't object at the wedding. Suddenly, Jessica runs back to Nash, their lips a breath apart, tells him to go to hell! Nash says that's exactly what Tess would say. He leaves.

Jessica wanders around the room, thoughts of what to do weighing her down

Kevin worries about Jessica, about Nash being missing, too! Clint says she'll be there soon. Kevin and Clint go in to congratulate Antonio before heading outside to look for her. No one has seen Jessica or Nash

Antonio confides in Cris, tells him he's nervous, says he wants everything to be just right.

Claudia and Blair share a drink at Capricorn, exchanging views on the wedding, their love life. Claudia suggests that Blair go and get what she wants! Blair asks Claudia if she wants to crash a wedding! A little tipsy, they head to the wedding

Blair and Claudia stumble into the church. When they see all the braid's maids worried, Claudia says, "Nash got to her!" She runs to Antonio's room, asking him where Nash is! However, Antonio says he's not worried Jessica will be here

Blair makes a drunken scene in the church when she drops her purse and change all over the floor. Todd goes to Blair, tells her if she embarrasses him or his niece, he'll throw her out!

Whispers spread through the church with everyone hearing of Jessica's absence.

Vincent gets the doctor, tells him that Hugh has brown eyes, not blue like the nurse is saying. Vincent tries looking at Hugh's chart, screams to the doctor that Hugh Hughes's eyes are NOT blue! The doctor claims that Vincent is confused, that he's upset. Vincent demands that the doctor check Hugh's eyes. However, the doctor tells Vincent to calm down, then leaves. Vincent leaves, too. John opens his eyes!

In the hallway, Vincent calls an old friend, asks him what color eyes he remembers Hugh having. His friend says brown, and Vincent comments, "That's what I thought."

Vincent goes to the church, pulls Evangeline aside and tells her there's something strange going on with Hugh. Vincent reminds her of the strange things that 'Hugh' was responding to at the hospital the other day.

The wedding music starts, and the girls walk down the aisle. Natalie stops to look at Vincent, and Evangeline gets a puzzled look on her face. Evangeline tells Vincent they'll talk about this later and goes to sit down.

Nash storms in, and Clint demands to know where Jessica is. Nash says he saw her back at the house. Clint needs to know if there's something he should be aware of, and Nash tells him to ask Jessica. Nash goes into the church and joins the men at Antonio's side. All eyes turn to the door where a confused Jessica stands with her arm laced through Clints

Next on One Life to Live: Jessie is reminded of Nash's pleas as she walks down the aisle, watching Nash struggle with his emotions, Starr stares as Cole interacts with Britney and Michael has a surprise for Marcie...