Don't you look down your nose! Your grandmother's one of them!
I about spit out my coffee when David hushed Matthew's worries over spending time with hookers by reminding him that Grandma Renee was once one! I can't say it enough… David's scenes are such a breath of fresh air. Between him and Roxy I'm not sure which keeps me laughing the most. Matthew is one smart kid. Like I said before when Dani wanted to have sex with him, not many guys would have turned her down. He did it again, turned down sex with a hooker, Fawn, yawn, whatever her name was. Bo and Nora would be proud! However, I think it was nice of Matthew to allow David to think he scored his brother his first piece of tail. That's a fawn tail to you, David!

Whiskey Sours… You Remembered.
Last week I was happy Rex and Gigi reunited without jumping in the sack to do it. This week I've changed my mind. I found their interactions sweet but borderline boring. I hope these two get thrown back into some adventure soon. Hey, a girl's allowed to change her mind, right?

Thanks for stopping by and be sure to leave me a comment. Don't forget to check out my Saturday Teaser Poll surrounding who Hannah tries to set up. Do you want more soap scoops? Follow Soaps.com's Editor-In-Chief on Twitter @soapoperafan and join our official Facebook page today. 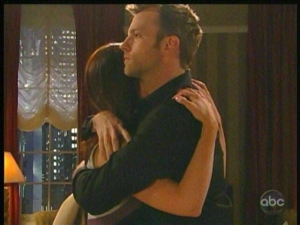 This week was all about emotions and dollar signs… Whether it was lingering guilt over a past bedmate, dealing with having been kept in the dark or simply wondering if one woman could have tried to kill Llanview’s biggest stud, they were out in full! Let’s break them down and see where I stand.

She’s Dying…
The emotion that Blair emanated over Tea’s condition was enough to break anyone’s heart. I loved the scene where she admitted the truth to Todd. Blair not only continued to stand by Tea by explaining to Todd what Tea really needed, she was there for Todd as well. Todd confronting Tea was equally as touching. Great stuff! I have to admit it took me a while to get over the fact that Blair and Todd were no longer going to be a super couple. I’m not sure how the show managed to convince me that Todd belongs with Tea and Blair, well, she could’ve done a lot worse than Elijah. Props writers, you sold me on these couples.

Who Needs A Summer Job?
Boy did Dani and Nate ever hit the jackpot this week! I like how their wealthy find tied into James’ storyline. It not only gave us a glimpse into the mystery surrounding James but it’s going to set a huge summer storyline into high gear. What would you have done if you found the cash? Please let me know through my What To Do With The Cash poll. In any case we got our first look at Nate’s mom today, played by Jessica Leccia who used to play Natalia on Guiding Light and will return for season two of Venice: The Series as Ani in August. I’m going to go out on a limb here and say… Could it be Rex’s mother didn’t really die and Inez is Lily? I know, it’s a little early to speculate but I’ve had this feeling for a while now [not to be confused with a spoiler]…

Hold Off On Ford’s Release Papers!
If I could give my own rear a really hard swift kick I would. Though he didn’t deserve to be beaten I felt sorry for Ford when he first opened his eyes and heard someone tried to kill him. Once he got his wits about him he was back to his arrogant self during John’s questioning… saying people would kill to be him or want to be with him. What a loser. Maybe the fact that he grew up with an abusive father, like James confessed to Starr, is the reason for Ford’s demeanor? Speaking of James… He really got Starr into a jam, didn’t he? How ironic that Starr went on the run with James just as Cole was released on bail. I love it and couldn’t be happier that a lot of the teen scene will be drawn into this storyline this summer! I want to see James protect Starr, Cole fight for Starr, and Nate and Dani get mixed into it all. One person I could do without is Hannah. Good thing John is getting wise to her. I think Marty is now as well!

One Life to Live Saturday Teaser Poll: Evidence Is Planted