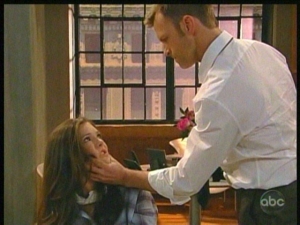 Bo got sauced before the reception! (Soaps.com)

It was only a four day week in Llanview but we were treated to a major event… The road to Bo and Nora’s much anticipated wedding day! However, a few other storylines were speckled in here and there so let’s take a look at those first…

Everything’s My Business!
Markko was arrested but I’m still not convinced he tried to kill Ford. Hannah on the other hand is looking guiltier and guiltier as the days go by. I loved it when Todd snatched her face between his fingers and informed, “Everything is my business!” With that being said I wish they would wrap up this “Who pushed Marty down the stairs?” storyline because I’m sick of seeing Cole behind bars while Todd’s out on bail. You know what they say about wishing in one hand and doing something else in the other… Unfortunately, we still have quite the road ahead of us before this happens.

What Happened To Positivity?
I’m a huge Jolie fan but am already disappointed with the way their relationship is going. Tuesday’s episode had John reminding us that he’s a man of few words. Really? Natalie talked about how they always seem to screw things up. Is that so? John again reminded Natalie that he still has an issue with how to express his feelings. Like we needed another reminder! Correct me if I’m wrong but shouldn’t these two be starting fresh on a positive note? Hmmm… If Marty hadn’t been the third wheel in this circumstance I’d suggest they head over to Llanview Hospital to see her for some couples counseling.

Life Lessons 101.
Nate and Dani have been tip-toeing around their hidden feelings for each other for a few weeks now. It took Destiny forever to get over Matthew and now she’s reverted back to being his best friend, one who doesn’t plan on watching him get hurt. The look on her face when she stumbled upon Nate and Dani kissing was priceless. I feel for Dani. This poor girl is being pulled in every direction. I can see why she latched on to Matthew. He was there for her when she needed a friend the most. Now that she’s fallen hard for Nate she’s faced with breaking Matthew’s heart. Again, like I said in the past with Shaun voicing his ‘I love yous’ too soon, life lesson 101! Needless to say there are going to be big things happening for the young crowd this summer…

Everything's Going To Be All Right.
How many times did we hear that phrase this week? A ton but it was well suited and a positive way of thinking. [Take note John and Natalie.] Bo and Nora have always been kind of quirky as a couple so the scenes relating disaster after disaster throughout the week were hysterical to me. And Natalie's slaps of encouragement for Roxy to turn Nora's hair from green back to red had me roaring! Who doesn't like a bit of comedy thrown in? However, seeing as this storyline came on the heels of Starr X'd Lovers some fans weren't all that thrilled with them. So of course I wanted to poll everyone to see what the majority thought. Please let me know your thoughts on how Bo and Nora's wedding is coming along through my All That You Expected? poll. It was nice to have David back in Llanview. Though many thought it was a joke having Bo turn out to be his father I think their interactions are awesome. It works! In the end, next week will wrap up the wedding and bring Bo and Nora fans the long awaited event they've wished for.

The Gift That Keeps On Giving…
What do you have to look forward to next week? Three couples make love. Can you guess who they are? Someone unexpected sends Bo and Nora a wedding gift. Langston makes a confession… Could it be she's the one who beat Ford? Stay tuned or take a look at some of the Upcoming Spoilers today!

Thanks for stopping by and be sure to leave me a comment. Don't forget to check out my Saturday Teaser Poll surrounding who David is caught with his hands all over. Do you want more soap scoops? Follow Soaps.com's Editor-In-Chief on Twitter @soapoperafan and join our official Facebook page today.

One Life to Live's Mellini Kantayya...