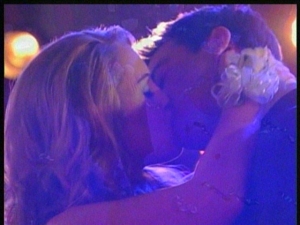 A lot happened during the prom this week. The musical was rocking, emotional, comical and filled with so much drama we had to pay close attention or we’d miss something! Let’s take a look at what unfolded…

A Prom To Remember.
I was really pleased with the conclusion of Starr X’d Lovers. The concept, performances and incorporated storylines clicked to a tee. From someone who wasn’t looking forward to it, I thoroughly enjoyed it! It was so much better than the last one. From the singing and dancing, to Jessica stuffing the prom king and queen ballot box to her hint of a memory, loved it all! Dorian was Cole’s Fairy Godmother, who just happens to be Llanview’s mayor. It was great seeing Dorian use her authority in this capacity and doing something for the right reasons. What an appropriate way to end the musical by having Starr and Cole share a dance alone in the gym. Starr X’d Lovers came full circle on Tuesday. Props to the writers! However, we are back to reality and Cole’s right to wonder if things will ever be the same between him and Starr.

Battlefield!
It’s about time Cris put Jessica in her place. It’s just too bad she caused Layla and Cris to argue before he had the chance to execute his romantically planned proposal. The upside? We got to watch Tika Sumpter rock out to “Battlefield,” my favorite musical scene. What was yours? Vote in our Favorite Starr X’d Lovers Musical Scene Poll to let me know.

The Fun Was In The Risk.
Markko finally found out that his girl has been getting her pizza fix, with extra pepperoni, elsewhere. And Langston caught Ford red-handed… with the pizza delivery girl naked in his arms. Can someone please tell me how Langston could kiss Ford after finding him having sex with Karen? If Markko hadn’t shown up I have no doubt she would have slept with him. This isn’t pre-school Langston and we don’t have to share… just plain gross. I’m thankful that Markko didn’t let Langston talk her way out of the affair, especially after she realized Ford had only been in it for the risk of getting caught. What do they say about life lessons… Take note Langston, this is one of them.

You Taught Me How To Be Strong Enough To Say Goodbye.
No matter what I think of Marty I respect her for giving John Natalie’s letter. She could have destroyed it and John wouldn’t have suspected a thing. Let’s face it… It’s something many of us would’ve done. With that being said I have been waiting for the end of Marty and John since they started dating. I knew John and Natalie couldn’t have an uncomplicated reunion. Little does he know she was off washing away her sorrows with kisses from Brody. I’ve waited years for John to throw caution to the wind and be honest about his feelings. So like Natalie, I’m going to forget the drama and savor every bit of John trying to persuade her not to leave Llanview. Stay tuned!

A Flood Of Memories…
It may have taken Brody's brash admission and Ford's attempted seduction but Jessica finally remembered her current [and I stress 'current'] life. Though I, as an outsider, can understand Brody turning to Natalie in the heat of the moment I don't think Jessica will. Brody's a standup guy so I'm not sure he can live with the guilt of sleeping with Natalie. I'm not one to keep secrets but I think it's best for everyone involved if Natalie and Brody's secret stays buried between Brody's sheets. What do you think about what went down? Please vote your thoughts through our Brody and Natalie's Sex Romp Poll.

Emergency Room Bound.
What do you have to look forward to next week? Markko will make a trip to the emergency room. Will it be to visit someone or will Markko need help himself? Todd threatens Hannah but will she take him seriously? John makes a declaration to Natalie. Will it be too late? Take a look at some of the May Sweeps Spoilers today!

Thanks for stopping by and be sure to leave me a comment. Don't forget to check out my Saturday Teaser Poll surrounding who covers for Langston. Do you want more soap scoops? Follow Soaps.com's Editor-In-Chief on Twitter @soapoperafan and join our official Facebook page today.

I'll see you back here next Friday for another week's worth of Amy's "One Life In A Week!" Until then please take our short survey: Tell Us What You Want On Soaps.com!

One Life to Live: Renee Elise...