"You Have No Idea Who You're Dealing With."
Todd was right. Hannah was in way over her head trying to strike a deal with the devil himself. Too bad Cole's too consumed with hatred for Todd to see through Hannah's obvious ploy to come between him and Starr. Can I just say it's about time feisty Starr reemerged! It's clear Starr can hold her own, even through all of the insecurity slinging Hannah tried to poison her mind with. I wanted to jump through the screen and put Hannah in her place when she was patronizing Starr. Todd was right to call Hannah a psycho. This girl definitely has a few screws loose. Good thing Todd's accusations have planted a seed of doubt in John's mind.

Insecurity: Not A Good Sign.
Speaking of insecurity… It's apparent John and Marty have reached a standstill during their grieving, which they're doing in separate ways. I was surprised when Marty turned down John's offer to have another baby. While a new baby couldn't fill the void of the one lost it would be true soap fashion for Marty to hang on to John through those means. I figured she would jump at the chance! Clearly she's worried Natalie may have been right about the baby having been the only thing holding them together… Or she wouldn't have stolen the letter Natalie left for him.

Cat Fight at Foxy Roxy's.
Starr X'd Lovers has officially begun today. The girls couldn't have picked a more appropriate spot to hold their pre-prom pampering. While Roxy may have been hoping for a fun day of manicures some of the girls weren't willing to have their claws filed away. Jessica and her comments about put Layla over the edge. I really enjoyed all of the musical segments, and song selections, today. Hang on to your corsages and boutonnieres fans, prom night's about to get catty!

Champagne For All!
What do you have to look forward to next week? Starr X'd Lovers wraps up on Tuesday. Will any revelations come from the event? After Marty faces her guilt John decides who he wants to be with. Will it be too late? And the best news of all… Jessica has a breakthrough! Will she finally remember Brody? Whether she does or not I've already broke out the champagne! Take a look at some of the May Sweeps Spoilers today!

Thanks for stopping by and be sure to leave me a comment. Don't forget to check out my Saturday Teaser Poll surrounding who gives Starr some wise advice. Do you want more soap scoops? Follow Soaps.com's Editor-In-Chief on Twitter @soapoperafan and join our official Facebook page today. 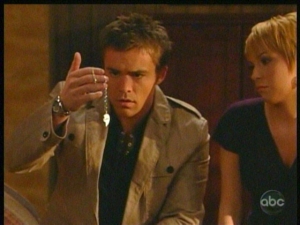 Credit: A seed of doubt courtesy of Todd! (Soaps.com)

What do you get when you throw in some old jewelry, a few slices of saucy pizza, some deceit, a big hunky bodyguard and a prom? This week in Llanview!

Dr. Seuss in New Mexico.
It’s no secret that Otto knows something about the necklace and I laughed out loud when Rex asked, “Are you my father?” I immediately thought of the Dr. Seuss book “Are You My Mother?” and the scene reminded me of why I adore John Paul (Rex) so much. He can manage to throw comedy into even the most serious storylines. I’ve enjoyed Rex and Gigi working together to find the truth. I like that they didn’t just give in to the attraction that’s still obviously there. They are working toward a bigger goal, regaining trust, while getting arrested along the way, and I think they just might have another shot at love.

Fueled by Pizza and Women.
Does Ford live on pizza and women? By now he must have an open ended tab with Karen the pizza delivery girl and the second he invited Jessica in for the saucy treat I was shaking my head. Good thing Jessica wants Cris… If she didn’t Ford wouldn’t have any trouble luring her into his pizza box covered bed. Wait, strike that… Seeing that she’s a virgin in disguise Jessica may very well be Ford’s biggest challenge yet. How would you react toward Ford if you didn’t know about his ways? Please take a moment to vote in our Ford Poll: Is He or Isn’t He? For those who are sick of Markko being played a fool… There’s a light at the end of the tunnel. Stay tuned!

Shifted Emotions.
I love, love, love Blair’s support of Tea. Their scenes have been heartbreaking, touching and even comical at times. Though I’ve always enjoyed Blair and Tea as enemies they make a good team as friends too. It was also great seeing Tea and Dani share some nice mother/daughter moments. These two could use some happiness with all of the drama that has consumed them since their arrival in Llanview.

Vote! Soaps.com's Fourth Annual Sudzies for One Life to Live!

One Life to Live Saturday Teaser Poll: Advice For Starr 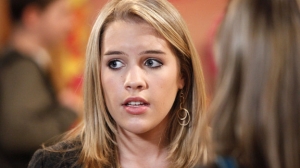